Propaganda video comes on the heels of a suggestion that Republican hopeful’s controversial remarks about Muslims would be used to recruit jihadis. 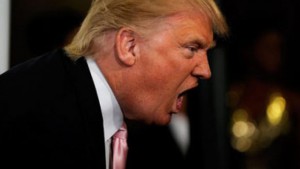 The more-than 51-minute propaganda video comes on the heels of a war of words between Trump and Democratic party frontrunner Hillary Clinton over her suggestion that the real estate mogul’s controversial remarks about Muslims would be used to recruit jihadis.

The video includes a clip of Trump calling for a “shutdown” of Muslims entering the United States.

“Donald J. Trump is calling for a total and complete shutdown of Muslims entering the United States until our country’s representatives can figure out what the [bleep] is going on,” Trump says in the clip. The group bleeps out Trump’s use of the word “hell.”

Immediately preceding the message is a statement from Anwar al-Awlaki, the American terror leader who was killed in a drone strike in 2011.

Awlaki discusses America’s history of race relations and his predictions for the future.

Clinton sparked a feud with Trump when she suggested during a debate hosted by ABC News that Trump was being used to recruit new jihadists.

“He is becoming ISIS’s best recruiter. They are going to people showing videos of Donald Trump insulting Islam and Muslims in order to recruit more radical jihadists,” Clinton said during the Democratic debate on Dec. 19.

Clinton provided no specific evidence of the claim being true.

“Knowing the Clintons and knowing Hillary, she made it up,” Trump said on ABC’s “This Week” on Dec. 20.

Clinton’s camp clarified that she wasn’t referring to a specific video but rather Trump’s remarks being used on social media for the purposes of recruitment.

“She’s not referring to a specific video, but he is being used in social media by ISIS as propaganda,” Clinton Communications Director Jen Palmieri said.

The situation got uglier as the days went on, with Trump branding the former Secretary of State a “liar.”

“She’s a liar!” Trump told a crowd in Grand Rapids, Michigan on Dec. 22. He also called her “crooked” and “not a president.” Clinton’s team said “hell no” she won’t apologise for her remarks.

Clinton and Trump’s camps did not immediately respond to requests for comment about the Al-Shabaab video, ABC News said.