You are here: Home / Africa / Al-Shabaab fighters kill 10 in attack on Somali government base 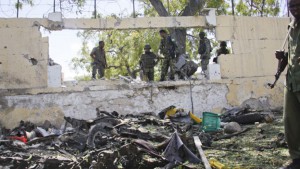 At least 10 people were killed in Somalia when al-Shabaab Islamist fighters attacked a government base with rocket-propelled grenades and heavy machine guns, Radio Andalus, a broadcaster that supports the al-Qaeda-linked militants, said on its website.

Government forces killed nine al-Shabaab fighters during the attack in Elshil near the central Somali town of Elbur, local Governor Nur Hussein Gutale said by phone. Only one government soldier was killed in the battle and six others were injured, he said.

Al-Shabaab has waged an insurgency in the East African nation since 2006 in a bid to impose a strict form of Islamic law. While the group has lost ground since being driven out of the capital, Mogadishu in 2011 by government and African Union forces, it continues to stage deadly gun and bomb attacks. Ethiopian and Somali troops captured Elbur and surrounding areas from al-Shabaab in March 2014 after about eight years of Islamist control.