You are here: Home / Africa / Al-Shabaab claims control of US drone in Somalia 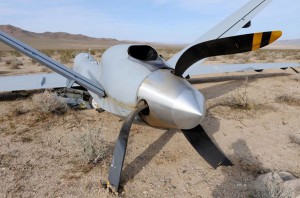 The Al-Qaeda affiliate Al-Shabaab said it has captured a drone which fell down in the Bay region of Somalia.

The militants said they were in possession of the drone which they claimed belonged to the United States after it came down near El Bashir village.

There was no comment from the Somali government or the African Union Mission in Somalia AMISOM which has been battling the militant group alongside the Somali National Army.

The U.S. has been deploying drone attacks against Al-Shabaab which have killed senior leaders and intelligence commanders of the group.

A resident in the area who spoke anonymously to local radio said the drone fell on his farm and caused a scare in the area.

“We ran away fearing it could explode. Al-Shabaab militants in the area come over and carried it away in a car,” he said.