You are here: Home / Africa / Al-Shabaab beheads civilians in Somalia 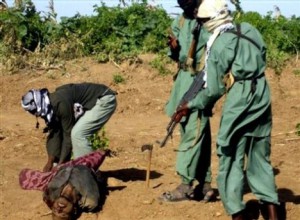 Somalia’s Al-Shabaab militants have beheaded five civilians, whom they accused of “spying” for the Somali government and Ethiopian troops, in Tiyeglow town of the southwestern Bakool region, an MP said Tuesday.

Member of Federal Parliament Mohamed Hussein Isak told reporters that the militants arrested these men from the town on Oct. 27 after Ethiopian troops, which is part of the African Union Mission in Somalia (AMISOM) troops, quit from the town, and killed them on Monday evening.

Al-Shabaab militants took the town after Ethiopian troops left there last week, citing a lack of support for their operations against the militants.

“The situation in Tiyeglow town is very terrifying, five innocent civilians including businessmen and scholars were beheaded outside the town by Al-Shabaab militants… Their dead bodies were found from outside the town,” Hussein said, adding the relatives of the deceased had been missing since Oct. 27.

Hussein said hundreds of families fled Tiyeglow to Hudur, the capital of Bakool. “There are efforts to retake control of the (Tiyeglow) town at the moment,” he added without giving details.

AMISOM troops are helping the Somali government battle the Al-Shabaab Islamist group, but the European Union earlier this year announced a cut in its funding for the troops.