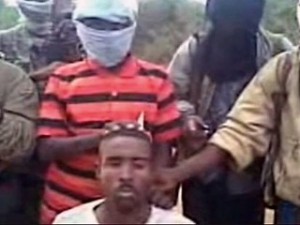 Al-Shabaab, the Somalia-based Islamic group, has seized the town of Halgan in the Hiran region after African Union peacekeepers pulled out and are said to be beheading civilians.

The peacekeepers, made up of 22,000 soldiers and police from African nations, (AMISOM) have been supporting Somalia’s government and army against the militant group since 2004, when the forces launched a military offensive to drive al-Shabaab out of major strategic centres.

Fighters from the al-Qaeda-affiliated group seized control of Halgan, a third town in central Somalia this month after the withdrawal of Ethiopian peacekeepers.

On 23 October, the African Union forces pulled out of Halgan, allowing al-Shabaab fighters to enter soon after, Abdiasis Abu Musab, the group’s spokesman on military operations, was quoted as saying by the BBC.

Reasons behind the contingent’s withdrawal is still unclear. Officials in Ethiopia were not immediately available for comment.

Residents are ‘beheaded’ in retaliation

Al-Shabaab are carrying out abuses against residents in retaliation, Dahir Amin Jesow, a local MP, was quoted as saying by Reuters news agency. “Each day, civilians are being beheaded over suspicion that they are government supporters,” he said. “We do not have a government that is effective enough to protect our civilians.”

Although the militant group has lost its grip on most of the country, there has been a rise in such attacks by al-Shabaab in recent times. In June, Al-Shabaab militants stormed an army base used by Ethiopian troops in Halgan town after ramming the entrance with a car bomb.