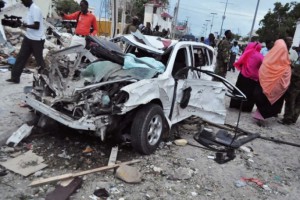 The Somali militant Islamist group al Shabaab attacked a Mogadishu hotel on Sunday, driving a car packed with explosives through the hotel gate and killing at least 13 people, a first responder and the rebel group said.

China’s Foreign Ministry said that a Chinese national who worked doing security at its embassy in the country, which is located in the hotel, was among the dead, and that three others received minor injuries.

A police officer, Major Nur Osoble, told Reuters a suicide car bomb had rammed the gates of the hotel, damaging the facade.

Al Shabaab, which said it was behind the blast, frequently stages bomb and gun attacks in the capital in its bid to topple Somalia’s Western-backed government. The nation is trying to rebuild after two decades of conflict and chaos.

“It is a response to attacks and helicopter bombing against al Shabaab by AMISOM and the Somali government,” Sheikh Abdiasis Abu Musab, al Shabaab’s military operations spokesman, told Reuters.

AMISOM, the African Union’s force in Somalia, has been battling the Islamist rebels with the Somali army. Al Shabaab has been pushed into increasingly smaller pockets of territory by a military offensive this year.