You are here: Home / Mediterranean / Al-Serraj and US Africa Command discuss Libya’s future after IS defeat 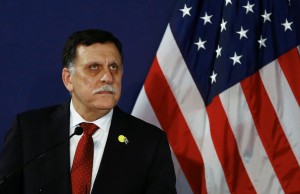 The Head of the Presidential Council of the UN-brokered Government of National Accord (GNA) Fayez Al-Serraj, discussed the latest about the US military assistance to the GNA-backed forces in the war against terrorism in Sirte with the Chief US Africa Command (Africom) Thomas D. Waldhauser, and US delegate to Libya Jonathan winer in Stuttgart, Germany.

Al-Serraj alomg with his political adviser Al-Sinni and the chief of Security Preparations Commission, Al-Taweel, received confirmations that the US will keep on supporting the GNA and the Presidential Council in order to create a stable and secure Libya after rooting out IS militants from the country.

“Libya would like to receive the US military expertise and training for the forces in the country so as to build a strong army. We would like to cooperate with the US in the information exchange regarding any terrorist acts in the region.” Al-Serraj told the US officials.

He added that the GNA and Libyans appreciate the aid of the US military and air force in the war against IS in Sirte and in the push for a better and stable Libya.