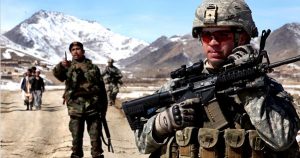 Just as the United States redoubles its 16-year-old military effort in Afghanistan, counter-terrorism specialist are spotlighting a “code of conduct” issued by al-Qaida’s branch in the region that declares the jihadist movement’s commitment to cooperating with the Taliban and calls on Muslims everywhere to support the “Islamic Emirate of Afghanistan”, like reported by wnd.com.

Al-Qaida in the Indian Subcontinent, or AQIS, is the al-Qaida branch for Bangladesh, India and Pakistan, and as the new code of conduct indicates, also Afghanistan and Burma.

The AQIS document, which has received little attention since it was issued June 25, declares that targeting Americans and U.S. interests in Pakistan are its “foremost priority.”

In his August speech to the nation, President Trump announced a new strategy in Afghanistan that would include the deployment of more American troops and the continued training of Afghan forces, with the objective of convincing the Taliban it cannot win on the battlefield.

The al-Qaida document was the focal point of a panel at the recent World Summit on Counter-Terrorism, an annual gathering of counter-terrorism specialists hosted by the International Institute for Counter-Terrorism in Herzliya, Israel.

Former Department of Homeland Security counter-terrorism specialist Philip Haney, who attended the conference, pointed out that with more armed fighters pledging allegiance to the AQIS coalition, Taliban and ISIS forces have begun conducting joint operations against both civilians and the government-supported Afghan Local Police.

“This means that the conflict arena in Afghanistan will expand and that fighters from jihadist groups across the entire Indian subcontinent – not to mention from other Islamic countries that have been influenced by al-Qaida – will become involved in the AQIS-led jihad,” Haney said.

“This will put American soldiers in the middle of an increasingly complex battle environment, where it will become even more difficult to tell who our friends are, and who our enemies are.”

Haney noted Secretary of State Rex Tillerson specifically has laid out a strategy of compelling the Taliban to come to the negotiating table by countering their reasons for keeping up their fight.

The Trump administration also insists Pakistan must adopt a “different approach” to the conflict and play a central role in persuading the Taliban to come to the negotiating table, instead of supporting jihadist groups such as the Taliban and harboring known terrorists.

“With the emergence of AQIS, it seems less likely than ever that the Taliban will agree to abandon its goal of implementing Shariah law across Afghanistan and negotiate some kind of peace agreement with the current U.S.-backed government,” Haney said.

AQIS clearly hopes that the Taliban will be able to revive its state inside Afghanistan, warned Thomas Joscelyn, senior fellow at the Foundation for Defense of Democracies and the senior editor for FDD’s Long War Journal.

“The Islamic Emirate of Afghanistan is closer to that goal today than at any point since Sept. 11, 2001,” he wrote in an analysis of the AQIS code of conduct. “And it is a goal that AQIS is working towards.”

Coalition against ‘enemies of Shariah’

This year, some 1,200 counter-terror specialists in the academic, diplomatic, intelligence, law enforcement and military arenas from more than 30 countries attended the 17th summit in Israel, Sept. 11-14, under the theme of “The Terrorism Maze.”

At the summit, a panel of seven experts from India, Israel, the Netherlands, Pakistan and the U.K. led by ICT senior researcher Michael Barak discussed the emergence of the new coalition of Salafi Muslim groups in 2014 that is now known as AQIS.

The panelists emphasized that the central role Afghanistan and Pakistan play in both the global Islamic movement and in the international terror network has been largely overlooked by governments outside of the area and even by counter-terrorism specialists in the West, which is reflected in policy.

The AQIS code of conduct specifically authorizes attacks against American and Israeli civilians, and against the governments of the five countries in the subcontinent supporting the U.S., calling them “the enemies of Shariah” and the “global forces of infidelity.”

The document confirms a new transnational coalition of jihadist groups operating across Afghanistan, Pakistan, India, Bangladesh and Burma have  pledged loyalty to the strategic goals of both the original al-Qaida and to ISIS, which has morphed into a global coalition of at least 30 groups.

The “code of conduct” emphasizes the allegiance of al-Qaida members to Osama bin Laden’s successor, Ayman al Zawahiri, and to the emir of the Taliban, Mullah Haibatullah Akhundzada.

AQIS says its members are fighting “shoulder-to-shoulder” with the Taliban “mujahideen.”

The preamble states – establishing the legitimacy of engaging in war against those who reject Islam – it is “a manifest reality that one purpose of jihad is breaking the might of Kufr (infidelity) and establishing Shariah; while another one is guidance, protection, and welfare of the Muslims.”

“Both purposes are necessary and interdependent on each other. A lapse in moving towards one of the two objectives, makes advancing towards the other impossible,” the document states.

“Considering the current state of affairs, there is a need – more than ever – for a jihadi movement in this region of the world that advances forward without losing sight of either of these two objectives, while holding the two purposes equally important.”

AQIS says such a movement “would undoubtedly be a mercy and blessing for the Muslims of the Subcontinent; and would also result in turning this dark night of oppression and corruption into a bright morning of Shariah.”

“Hence, it is a religious obligation upon every mujahid and every jihadi organization to make the aforementioned objectives, the focus of all their jihadi activities.”

AQIS said it “invites the Muslims of the subcontinent to pledge their allegiance to the Islamic Emirate and to support it.”

Joscelyn noted the new code of conduct explains that AQIS fighters are integrated into the Taliban’s chain-of-command.

“The mujahideen associated with the Jama’ah [AQIS] … are present on the ground under the emirate’s flag, and are actively participating in battles against the enemies of sharia,” the text reads.

He said the integration explains why AQIS has produced only minimal propaganda from the battlefields in Afghanistan, even though it is clearly contributing to the fight.

AQIS says an American withdrawal from Afghanistan, signifying Western defeat, would be a boon for the jihadis’ cause throughout the Indian subcontinent.

“It is our conviction that the defeat of America and its agents would result in victory for the religious forces in this entire region,” says the document.

Joscelyn commented that while the war in Afghanistan “is America’s longest, and there are many reasons to be skeptical about the future of the country, the enemy’s assessment must be weighed when assessing military options going forward.”

“And AQIS thinks that an American defeat would be a clear victory for the jihadists, with effects that ripple throughout the neighboring countries.”