You are here: Home / Africa / Al-Qaida-linked group reports on attack in Mali’s north 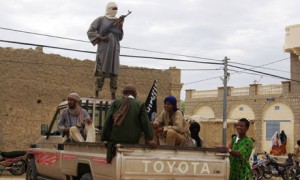 SITE Intelligence Group says that al-Qaida in the Islamic Maghreb posted the report on its Twitter account late Tuesday. It says that the attack in the city of Nione in the Segou region wounded and killed soldiers, and weapons were taken.

The Islamic extremist group says the operation comes as part of the ongoing campaign to expel French forces.

Mali became a focal point for jihadi groups in 2012 when for nine months the Ansar Dine movement, composed mainly of ultraconservative Tuareg tribesmen, and other Islamic extremists held sway over northern Mali until pushed out by a French-led military intervention in 2013.