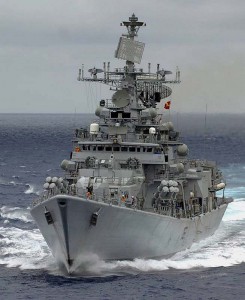 The three Indian Navy (IN) Ships—INS Mumbai, Tarkash and Sumitra—returned back after completing their mission rescue Operation Rahat that they took over under challenging conditions evacuating over 3,000 people, including Indians, from the war-torn Yemen.

The toughest rescue, though all was difficult, was carried out by the Saryu class patrol vessel (INS Sumitra) on April 5 that evacuated 203, including 182 Indians, from Ash Shihr port which is located 25 nautical miles (46 km) away from the Al Qaida militant base at Al Mukalla. Meanwhile some of the crews of INS Tarkash were placed onboard the two passenger liners, escorted to Kochi port, to keep an eye onboard 70% Bangladeshi nationals among the Indians those embarked from Djibouti Port on April 15.

Stealth frigate class INS Tarkash which participated in the rescue operation returned back to Mumbai harbour in the morning on April 18 after it escorted two passenger liners—MV Kavaratti and MV Corals—with onboard 475 evacuees, including majority of Bangladeshi national, embarked at Kochi.

Destroyer class INS Mumbai returned back to Mumbai harbour on April 16 and INS Sumitra is back to anti-piracy patrolling duty at Gulf of Aden. The ships’ crews will be greeted and interacted by the senior officers of the command and the Chief of Naval Staff on April 20. “The entire operations was handled tactically so that no lives at put on risk and even the naval ships,” the Indian Defence spokesperson told TOI.

The Indians from the fallen city were moved to Ash Shihr port from where they were transferred to the Navy vessel using smaller boats under Operation Raahat, defence sources said adding that the conditions were difficult. Due to the security situation, INS Sumitra had anchored about three kilometres outside the port for 24 hours. Initially INS Sumitra has planned to evacuate Indians and foreign nationals from Al Mukalla port but citing the difficulty and possibility of attack from the militants the plan was dropped.

“After a makeshift in its plan the INS Sumitra alerted the evacuees to reach Ash Shihr port from where they were evacuated. The tactical move has helped for safe voyage without a single firing or attack from the militants. While there has been incident where a foreign nation faced the difficulty after they entered a port in Yemen armed and was backfired and was forced to return back after they witnessed firing and shelling on them at Aden port,” said the source.

After the request from the other nations, the INS ships carried out evacuation of both Indians and Foreign nationals that began on March 31 and the last rescue operation was completed on April 15. “IN rescued the evacuees after hiring the services of local boats from Yemen to ferry them out of the port and embarked them on INS vessels harboured outside the port, especially Aden. As the days progressed, the Port of Aden was engulfed in shelling and firing and permission for entry of ships was not accorded by the local authorities as fighting raged in the port city. ,” said the source.

The nine rescue operations was carried out from three ports—Aden, Al Hodeidah and Ash Shihr. INS Sumitra carried out five operations and rescued 1,621 people, including 705 foreign nationals of more than 30 countries.

Two each by INS Mumbai and INS Tarkash evacuating 915 and 538 respectively. “IN was first off the starting block, with INS Sumitra, one of the newest Offshore Patrol Vessels of the Indian Navy, being diverted immediately from her operational tasking in the Gulf of Aden and immediately entered the Port of Aden and evacuated the first wave of 349 Indians on March 31 and transported them to Djibouti. During the evacuation operations at Aden, the ship reported bombing and gunfire and a general disorder, pandemonium and unrest,” said the official.

The source said a small mistake could have put several lives at risk. “The Indian mission in Yemen and the sharp move with skillful coordination by the INS crews onboard has helped in tackling odd situation. INS Sumitra waited outside the Al Mukallah harbour for over 24 hours before it received information that the evacuees has changed the plan to embark from this port and has headed to Ash Shihr Port which is the safest one avoiding falling prey to the militants,” said the source.

While the rescue operation went becoming more and more difficult at Aden Port as time progressed. After all ships were in area the evacuation cycle continued with close cooperation between various Government agencies participating in the area and the three ships. “As very few countries were participating in evacuation, requests poured in from the international community to evacuate their citizens from the war zone also. Keeping safety of life as paramount requirement, these ships, provided assistance to many foreign nationals in escaping to safety,” said the official.