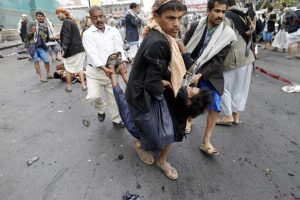 An Al-Qaeda suicide bomb attack on a security checkpoint in Yemen’s Shabwa province killed 14 soldiers and wounded others on Tuesday, like reported by arabnews.com.

A security source said that gunmen from the terrorist organization attacked a group of police forces using a suicide bomb and then fired a machine gun and mortars on the location.

The Shabwa elite forces took control of a junction in the province, where an attack took place in early August, and carried out raids and prosecutions of suspected Al-Qaeda members.