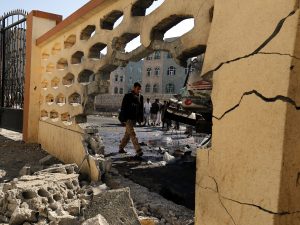 A suicide bomber rammed into a headquarters of Yemeni security forces backed by the United Arab Emirates in the southern province of Abyan on Monday morning, killing five soldiers and injuring three others, China’s Xinhua news agency reported quoting a military official as saying, like reported by bernama.com.

“At first a suicide bomber detonated a car filled with explosives near the headquarters of the UAE-backed Yemeni troops in Mudiyah district of Abyan province, making way for a number of attackers to start their assault,” the military official said on condition of anonymity.

Armed with explosive belts, four attackers were killed by soldiers after they failed to blew themselves up in front of the security headquarters in Mudiyah district, the source said.

The al-Qaeda in the Arabian Peninsula (AQAP) released a claim a few minutes after the suicide bombing stating that the armed confrontations are still taking place in the area.

Local residents told Xinhua by phone saying that huge explosions were heard and a battle between the attackers, armed with guns and suicide vests, and security forces were underway around the security headquarters.

A medical source at the public hospital in Mudiyah said that “ambulances transferred five bodies of killed soldiers and about three others with critical injuries to our medical centre.”

Al-Qaeda militants are intensifying their drive-by attacks on security checkpoints in the Yemeni southern provinces as UAE-backed government forces increase military operations against their hideouts in the war-plagued Arab country.

Thousands of southern recruits joined the campaign after receiving military training and financial support from the UAE forces.

The ongoing anti-terror campaign has dislodged al-Qaeda militants from several villages in Abyan, with more than 50 of them arrested and moved to prisons in Aden.

The Yemen-based al-Qaeda branch, seen by the United States as the global terror network’s most dangerous branch, has exploited years of deadly conflict between Yemen’s government and Houthi rebels to expand its presence, especially in Shabwa and Abyan provinces.