You are here: Home / MidEastGulf / Al Qaeda shows signs of resurgence in Yemen 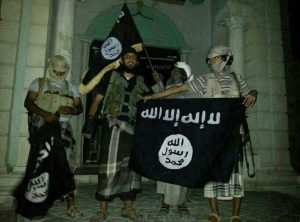 After years of setbacks and disarray, Al Qaeda’s Yemen branch appears to be attempting a comeback in southern areas – some under control of militias nominally allied to the government and with links to the Muslim Brotherhood, like reported by thenationalnews.com.

Al Qaeda in the Arabian Peninsula claimed responsibility for a spate of recent attacks.

On March 18, eight soldiers and four civilians died in a raid on a checkpoint operated by the Security Belt Forces in Ahwar district of Abyan province.

Three days later, Aqap claimed an attack on a military site controlled by Houthi rebels in the Mukayras district of Bayda province.

On April 6, Aqap claimed responsibility for a rocket attack on a military base in the Balhaf area of Shabwa used by Arab Coalition forces supporting the government.

The attacks indicate a resurgence for Aqap, particularly in Shabwa and Abyan, which were its former strongholds along with Hadramawt province.

The terror group has its roots in Muslim Brotherhood followers in northern Yemen who were sent to Afghanistan to fight the Soviets in the eighties.

Those fighters returned to Yemen after the unification of the north and south in 1990 and formed a local branch of Al Qaeda in the south that attacked American interests, including the bombing of the USS Cole in Aden in October 2000 which killed 17 American sailors.

The group ramped up its activities after Yemenis rose up against president Ali Abdullah Saleh in 2011, when it seized control of Abyan.

It widened its reach after civil war broke out between the Iran-backed Houthi rebels and the government of President Abdrabu Mansur Hadi in late 2014.

The UAE, acting as part of the Arab Coalition, helped pro-government forces to inflict fatal blows to Al Qaeda havens in southern Yemen, starting with the liberation of the port city of Mukalla in Hadramawt in April 2016 after a year of Aqap occupation.

Operations against Al Qaeda by Coalition-trained Elite Forces in Shabwa and Security Belt Forces in Abyan were halted after fighting broke out between pro-government forces and those supporting the separatist Southern Transitional Council in August 2019.

Militias comprising mainly Muslim Brotherhood followers then seized control of these areas in breach of a Coalition-sponsored ceasefire.

Members of Aqap have been returning to former strongholds in Shabwa and Abyan since 2019, local leaders and military officials say.

Sheikh Salem Al Othali, a tribal leader from Lawder district in eastern Abyan, said dozens of Al Qaeda militants returned to Abyan recently from neighbouring Bayda province. They have started regrouping and recruiting in their former strongholds of Moudyah and Al Mahfed districts, he said.

“The Security Belt Forces in Abyan and the Elite Forces in Shabwa, working with the tribes, inflicted fatal blows to Al Qaeda and successfully secured 90 per cent of Abyan and Shabwa,” Sheikh Al Othali told The National.

“Unfortunately, these forces could not carry on the battle to eliminate Al Qaeda and the other terror groups in Abyan and Shabwa because the two provinces have been under control of the pro-Muslim Brotherhood militia, which advanced from Marib and Jawf provinces to support the government forces which clashed with the pro-STC forces in August 2019,” he said.

“Dozens of Al Qaeda militants came back to Abyan in the last 10 months. They have been regrouping in Wadi Omaran in Moudyah district,” Capt Al Yousfi said.

“Some of them were released from prisons in the Houthi-held province of Bayda following a prisoner swap deal between the group and the rebels.”

Al Qaeda has been attacking soldiers from the Elite Forces since its return to Shabwa in August 2019, said Ahmed Al Hur, a resident of Ataq, the main city in the province.

“Six soldiers of the Elite Forces, were assassinated by Al Qaeda since the Muslim Brotherhood militia took control over the province in August 2019,” Mr Al Hur told The National.

The rocket strikes on the Coalition base in Balhaf was the first attack officially claimed by AQAP in Shabwa since September 2018, according to Dr Elisabeth Kendall, Yemen expert at Oxford University.

“This attack adds to the evidence that Al Qaeda is regrouping in the south. It may be that Al Qaeda elements from Bayda and Marib have moved south to join up with the group’s fragments in former strongholds like Shabwa and Abyan,” Ms Kendall told The National.

It may also be that splinters of Al Qaeda that were absorbed by more formal militias are once again asserting their Al Qaeda identity, she said.

“Al Qaeda has been severely degraded in Yemen since it was ousted from Mukalla precisely five years ago. But experience teaches us that extremism is never truly defeated, only managed. It will be easiest for it to resurge in areas where its roots are deepest, like Abyan, Shabwah and Hadramawt.”

Irina Tsukerman, a human rights lawyer and security analyst, attributed Al Qaeda’s resurgence to the presence of the Muslim Brotherhood militia in these provinces.

“Al Qaeda has been making a comeback in Yemen since 2019, particularly in the areas controlled by or with a significant presence of the Muslim Brotherhood group in Yemen and the proliferation of the group affiliates in the pro-Yemen government forces,” Ms Tsukerman told The National.

“The [Coalition] forces had been instrumental in working with the US and others in the past in dismantling Al Qaeda strongholds in those areas, however, since these forces mostly withdrew, Al Qaeda are taking advantage of the situation to return.”