As the Islamic State group (IS) suffers a downfall after its defeat in Syria and Iraq, a new challenge is rising: a revived Al-Qaeda, and its affiliates, which has started to regain its previous status as the world’s top terrorist threat. While the world focused on the self-proclaimed Islamic State, as it dominated the headlines … 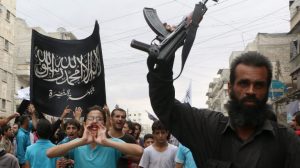 As the Islamic State group (IS) suffers a downfall after its defeat in Syria and Iraq, a new challenge is rising: a revived Al-Qaeda, and its affiliates, which has started to regain its previous status as the world’s top terrorist threat, like reported by dailynewsegypt.com.

While the world focused on the self-proclaimed Islamic State, as it dominated the headlines and preoccupied national security officials for the past four years, Al-Qaeda has been quietly rebuilding. The group announced another affiliate dedicated to the “liberation” of Kashmir last summer, coupled with the resurrection of its presence in Afghanistan and the solidification of its influence in Syria, Yemen, and Somalia, according to Bruce Hoffman, visiting senior fellow at the Council on Foreign Relations, who studies terrorism and insurgencies.

Hoffman indicates that although Al-Qaeda’s rebuilding and reorganisation predates the 2011 so-called Arab Spring, the security vacuum that followed allowed the movement to revive itself. As the masses longed for democracy and economic reform, Al-Qaeda discerned new and inviting opportunities.

The group faced a series of losses in the ranks of prominent figures in its organisational hierarchy, after the successive killings in 2011 and 2012 of Osama bin Laden; Anwar al-Awlaki, the group’s chief propagandist; and Abu Yahya al-Libi, its second-in-command. The string of deaths lent new weight to the optimists’ predictions that Al-Qaeda was a spent force.

However, it appears that Al-Qaeda was among the regional forces that benefited most from the turmoil that accompanied the Arab Spring. With the emergence of Ayman Al-Zawahiri as a powerful leader, forces loyal to Al-Qaeda and its affiliates now number in the tens of thousands, with a capacity to disrupt local and regional stability, as well as launch attacks against their declared enemies in the Middle East, Africa, South Asia, Southeast Asia, Europe, and Russia.

According to Hoffman, Al-Qaeda has knit together a global movement of more than two dozen franchises, with around 20,000 men under arms in Syria alone, and it has perhaps another 4,000 in Yemen and about 7,000 in Somalia.

Rising from the Arab Spring ashes

In the period from 2012-13, thousands of hardened Al-Qaeda fighters were freed from Egyptian prisons by Islamist then-president Mohamed Morsi. Those fighters acted as the movement’s kiss of life, when instability reigned and a handful of men well-versed in terrorism and subversion could plunge a country or a region into chaos. Whether in Libya, Turkey, Syria, or Yemen, their arrival was providential in terms of advancing Al-Qaeda’s interests or increasing its influence.

The ousting of Morsi afterwards was used as part of Al-Zawahiri’s propaganda to feed Al-Qaeda’s narrative to disbelieve Western promises about either the fruits of democracy or the sanctity of free and fair elections.

But Syria was the movement’s most prominent playground, as one of Al-Zawahiri’s first official acts after succeeding bin Laden as emir was to order a Syrian veteran of the Iraqi insurgency, named Abu Mohammad al-Julani, to return home and establish the Al-Qaeda franchise that would eventually become the Nusra Front.

At the start of the Syrian civil war, the Nusra Front was the product of a joint initiative with Al-Qaeda’s Iraqi branch, which had rebranded itself as the Islamic State of Iraq (ISI). However, as Nusra grew in both strength and influence, tensions and disputes started to erupt between ISI and Al-Qaeda over control of the group.

Later on, in a bold power grab, ISI’s leader, Abu Bakr Al-Baghdadi, announced the forcible amalgamation of Nusra with ISI in a new organisation to be called the Islamic State of Iraq and Syria (ISIS), without Al-Zawahiri’s approval. Consequently, al-Julani refused to accede to the unilateral merger and appealed to Al-Zawahri. The quarrel intensified, and after Al-Zawahri’s attempts to mediate collapsed, he expelled ISIS from the Al-Qaeda network.

Since its emergence, ISIS—which later on rebranded itself as the Islamic State (IS)— become the world’s main attention-getter. While the world focused on IS, Al-Qaeda has been quietly rebuilding its strength, and fortifying its various branches.

Al-Qaeda’s new strategy was to protect its remaining senior leadership, through scattering them to Syria, Iran, Turkey, Libya, and Yemen, with only a hard-core remnant of top commanders remaining in Afghanistan and Pakistan.

Syria: The cornerstone of Al-Qaeda’s resurrection

The importance that the group attaches to Syria can be seen through the high inflows of top Al-Qaeda leaders sent to the country in the last seven years. Among them was Muhsin al-Fadhli, a bin Laden intimate who, until his death in a 2015 US airstrike, commanded the movement’s elite forward-based operational arm in that country, known as the Khorasan Group. Haydar Kirkan, a Turkish national and long-standing senior operative, was sent by bin Laden himself to Turkey in 2010 to lay the groundwork for the movement’s expansion into the Levant, before the Arab Spring created precisely that opportunity. Kirkan was also responsible for facilitating the movement of other senior Al-Qaeda personnel from Pakistan to Syria to escape the escalating drone strike campaign ordered by former US president Barack Obama. He was killed in 2016 in a US bombing raid.

Moreover, in 2016, Saif al-Adl, who is arguably the movement’s most battle-hardened commander arrived in Syria. Al-Adl is a former Egyptian Army commando whose terrorist pedigree, dating to the late 1970s, includes assassination plots against former Egyptian president Anwar Al-Sadat, the 1998 bombings of the US embassies in Kenya and Tanzania, and Al-Qaeda’s post-9/11 terrorist campaigns in Saudi Arabia and South Asia.

Later on, Hamza, bin Laden’s youngest son, reportedly appeared in Syria in 2017, adding more evidence to the fact that Syria has become the most popular venue to wage holy war since the seminal Afghan jihad of the 1980s.

According to Hoffman, Al-Qaeda’s presence in Syria is far more pernicious than that of IS. Hay’at Tahrir al-Sham (HTS), the latest name adopted by Al-Qaeda’s local affiliate, is now the largest rebel group in the country, having extended its control last year over all of Idlib Province along the Syrian-Turkish border.

Throughout the seven years of the Syrian civil war, Nusra and Free Syrian Army (FSA)-affiliated brigades have essentially functioned as a coalition in the fight against the Syrian government, with FSA commanders often referring to fighters from Nusra as members of the FSA itself. In many cases, FSA offensives against Syrian government military bases or check points have begun with suicide or truck bombings carried out by Nusra militants. Nusra and FSA-affiliated brigades have established joint committees to divide weapons captured from the Syrian army in rebel offensives. FSA commanders often sell US and Gulf-supplied weapons to Nusra.

In a lengthy study analysing the Nusra Front’s strategy, Jennifer Cafarella of the Institute for the Study of War (ISW) concluded that “JN (Nusra Front, also known as Jabhat al-Nusra) serves as a force multiplier for other rebel groups. JN leverages small units of highly skilled fighters to contribute an essential special forces-like capability to rebel military offensives. JN provides highly effective capabilities such as the deployment of suicide bombers to produce asymmetric effects against the regime.”

According to Hoffman brief, IS can no longer compete with Al-Qaeda in terms of influence, reach, manpower, or cohesion. In only two domains is IS currently stronger than its rival: the power of its brand and its presumed ability to mount spectacular terrorist strikes in Europe.

However, Hoffman believes that the latter is a product of Al-Zawahri’s strategic decision to prohibit external operations in the West so that Al-Qaeda’s rebuilding can continue without interference. The handful of exceptions to this policy—such as the 2015 Charlie Hebdo attacks in Paris and the 2017 Saint Petersburg Metro bombing in Russia—provide compelling evidence that Al-Qaeda’s external operations capabilities can easily be reanimated.

Moreover, Al-Qaeda’s success in resurrecting its global network is the result of three strategic moves made by Al-Zawahri. The first was to strengthen the decentralised franchise approach that has facilitated the movement’s survival. Over the years, the leaders and deputies of Al-Qaeda’s far-flung franchises have been integrated into the movement’s deliberative and consultative processes. Today, Al-Qaeda is truly “glocal,” having effectively incorporated local grievances and concerns into a global narrative that forms the foundation of an all-encompassing grand strategy Hoffman explained in his policy brief.

The second major move was the order issued by Al-Zawahri in 2013 to avoid mass casualty operations, especially those that might kill Muslim civilians. Al-Qaeda has thus been able to present itself through social media, paradoxically, as “moderate extremists,” ostensibly more palatable than IS.

This development reflects Al-Zawahri’s third strategic decision, letting IS absorb all the blows from the coalition arrayed against it while Al-Qaeda unobtrusively rebuilds its military strength.