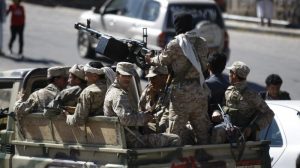 Yemeni forces backed by the United Arab Emirates have driven Al-Qaeda militants from a southern district that is the birthplace of President Abedrabbo Mansour Hadi, security sources said according to dailymail.co.uk.

Wadea is located in Abyan province, which for months was a no-go zone for pro-government troops and where Al-Qaeda fighters fled after a similar offensive in the neighbouring province of Shabwa last month.

Seven suspected Al-Qaeda members were arrested during the Wadea operation which began on Wednesday, including an alleged explosives expert known as Abu Abdallah, according to the sources.

Other sources said the jihadists had not put up a fierce resistance, but withdrew — a now familiar pattern for Al-Qaeda in Yemen.

“Most of the organisation’s leaders fled … and headed towards the nearby Muhafid district,” the sources said, referring to an Al-Qaeda stronghold on the edge of Abyan province.

Al-Qaeda in the Arabian Peninsula, seen by the United States as the network’s most dangerous branch, has exploited years of conflict between the government and Huthi Shiite rebels to expand its presence in Yemen, particularly in southern provinces.

The UAE is a key component of the Saudi-led coalition which intervened in Yemen in 2015, when Hadi fled into exile as the rebels threatened to overrun his last stronghold.

Around 100 UAE troops have been killed in the conflict.