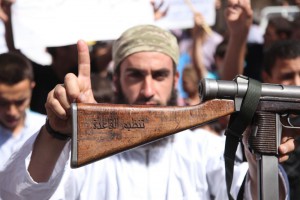 In mid-October, the so-called Islamic State released an audio statement titled “Say to Those Who Disbelieve: ‘You Will Be Overcome.’” In the message, Islamic State spokesman Abu Muhammad al-Adnani touches on many of the group’s traditional talking points, railing against the United States, the Russians, and Jews. In line with the group’s apocalyptic vision, he confidently predicts the day when the army of the faithful will defeat the crusader forces on the field of Dabiq, bringing about the end of days.

Al-Adnani does not confine his criticisms to the unbelievers and crusaders. Much of the statement is directed at the Muslim “factions” that resist the forces of the caliphate. Following a common Islamic State theme, al-Adnani directly mocks al-Qaeda leader Ayman al-Zawahiri for his pledge of bayat (allegiance) to the deceased Mullah Omar, and recites poetry implicitly calling al-Zawahiri a senile old man. He further dismisses the decrees of al-Qaeda’s “scholars” as the “verdicts of the donkeys and mules.”

On November 1, al-Qaeda released a response in the form of a video message from al-Qaeda in the Arabian Peninsula (AQAP) spokesman Khalid al-Batarfi, delivered on behalf of both AQAP and al-Qaeda in the Islamic Maghreb (AQIM). In the current context, the response provides a fascinating window into the state of al-Qaeda, and the strategizing that has allowed the group to survive fourteen years of the international war on terror. The theme of unity is constant throughout, and there are several references made to the “Islamic Spring” series released by al-Zawahiri as a call to all Muslims to unite against the true enemy of Islam, the West.

The overall tone of the al-Qaeda video is one of condescension, reinforced by al-Batarfi referring to the Islamic State as the “Baghdadi Group,” and his refusal to refer to al-Adnani by name. The statement rejects the legitimacy of the caliphate, and decrees all pledges of bayat to be null. The actions of the Islamic State, he says, are determined neither by shura nor by consent, and its members are compelled to give bayat out of fear rather than loyalty.

In essence, the video is meant to portray al-Qaeda as the mature—even moderate—jihadi group. Directly responding to al-Adnani’s mocking of al-Zawahiri, al-Batarfi cites a hadith that states, “Part of glorifying Allah is honoring the grey haired Muslim.” The statement is delivered as a wise elder chastising a rebellious youth for straying from the true path of jihad. Numerous times during the video, al-Batarfi denounces the Islamic State for neglecting the true enemy—the West—and instead spilling Muslim blood. Interestingly, while the video denounces the Islamic State, al-Batarfi never issues a threat toward the group, instead entreating its members to see the error of their ways.

Though the Islamic State has captured more international headlines in the past year, al-Qaeda has also managed to take advantage of the regional chaos. The war in Yemen has allowed AQAP to increase its territorial holdings, even seizing control of the coastal city of Mukalla. AQAP fighters allegedly assisted the Saudi-led coalition in the liberation of Aden, and the group still maintains a presence in the city. In Libya, AQIM is drawing massive profits from the increased smuggling trade, while the al-Qaeda affiliated Abu Salim Martyrs Brigade is in control of the eastern city of Derna. The al-Qaeda affiliate Jabhat al-Nusra is one of the strongest rebel forces within Syria, and will likely play an influential role in any postwar future.

Ultimately, the long history of al-Qaeda has taught it how to thrive under immense pressure. Unlike the Islamic State, al-Qaeda is excellent at fostering alliances and integrating into local communities. Nearly a decade of drone strikes has taught the group that hubris is generally rewarded with a missile from 10,000 feet. Al-Qaeda believes that it can outlast its upstart protégé, and maintain the top spot in the global jihadi sphere.