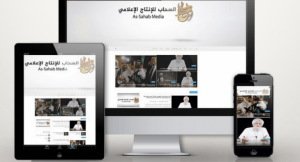 As terror propaganda from various groups is tucked away on filing-sharing sites, tweeted or shared on jihadists’ Telegram channels, al-Qaeda just launched a new WordPress website gathering their speeches, latest news and video archives in one easily accessible location, like reported by pjmedia.com.

The site from the terror group’s media arm, As-Sahab Media Production, includes a video player with a short ad for their media group; separately, al-Qaeda advertises that their site is formatted for desktop, tablet and mobile phones.

The lead story on the site is about “the story of love” between Saudi King Salman and President Trump, featuring a photo of Trump participating in a ceremonial sword dance during his May 2017 trip to the kingdom. There are addresses from al-Qaeda leader Ayman al-Zawahiri and one of his top lieutenants, Hossam Abdul Raouf.

There’s a section of statements from al-Qaeda’s general command and an archive of the group’s Al-Nafir Bulletin, a short topical essay published periodically by al-Qaeda’s Global Islamic Media Front and typically distributed on social media. A February issue of the bulletin retrieved from Twitter, for example, pointed to that week’s Wall Street seesaw to remind jihadists to hit the center of “global infidelity” in ways that inflict lasting economic wounds.

The video archives include a 55-minute film about the 2000 attack on the USS Cole.

“More material will be added to the archive on an ongoing basis so please visit the site again soon,” a banner on the site vows.

Around the same time the site was registered, jihadists were cautioned to not use “123456” or the word “password” as their online password in cybersecurity guidance issued by al-Qaeda in Syria.

“A memorable combination of letters is all that protects you from the Kafir [disbeliever] enemy such as their police and intelligence services. Remember there are spies everywhere: they will try to crack your password via phishing expeditions and via hacking,” said the instructions in the issue of Hayʼat Tahrir al-Sham’s English-language online magazine al-Haqiqa, calling a strong password “your first line of defense.”

Jihadists were reminded to be “very disciplined” in changing their passwords every six months (“most of us are creatures of habit and stick to their trusted password for years if they get the chance”), use different passwords for each “highly sensitive” account, and resist the temptation “to write your passwords down somewhere.” Al-Qaeda suggested they use an encrypted, non-cloud password manager to store their credentials such as “a freely available offline program like KeePass.”