The Syrian-based Nusra Front, an al-Qaeda offshoot, has launched a surprise attack against the Islamic State (ISIS/ISIL) in Western Syria, prompting a war between the two terrorist groups, reports AhlulBayt News Agency (ABNA). 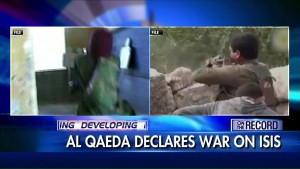 “Jabhat Al-Joulan (Al-Qaeda franchise) carried out an attack on ISIS’ positions inside the villages of Wadi Al-Zamrani and Wadi Al-Murtabiyah, resulting in a violent battle that claimed the lives 23 insurgents,” reports ABNA.

“ISIS was able to repel the large-scale assault that was launched by Jabhat Al-Joulan on Sunday; however, not before they lost 13 combatants along the western slopes of the Qalamoun Mountains,” it adds.

Al-Qaeda and ISIS are sworn enemies, both seeking to establish an Islamic state in the Middle East.

“Despite their military failure in the Qalamoun Mountains, Jabhat Al-Joulan only lost a total of 10 fighters during their battle with ISIS on Sunday, leaving the aforementioned terrorist group with the higher death toll,” notes ABNA.

The Nusra Front has accused the U.S.-backed Free Syrian Army (FSA) Division 13, a Bashar al-Assad opposition group, of targeting their checkpoints and bases in northern Syria.

“We had agreed to solve the problems without violence through the court. But in the meantime the Division 13 are inciting their supporters,” declared Abu Saeed al-Holandi, a Nusra member.

Both the FSA and Nusra Front have been fighting a common enemy: ISIS.

“Nusra has complied with the decisions of the court, and has so far remained aloof,” added Holandi.

The arguments between the FSA and Nusra Front could foment renewed confrontations between the rebel groups in northwestern Idlib province.

“Expect Jabhat al-Nusra [Nusra Front] to retaliate versus 13th Division in Idlib tonight and or tomorrow morning. Key 24hrs ahead for shape of Idlib future,” pointed out Charles Lister, a resident fellow at the Middle East Institute.

“This is a test for the U.S. policy in Syria. The United States says that it wants to reduce the influence, and work towards the defeat of Al Qaeda in Syria as much as it does to eliminate ISIS,” added Nicholas Heras, a Middle East researcher at the Washington-based Centre for a New American Security.

This is a critical stage in the Syrian civil war and there is a genuine opportunity for the moderate opposition to take advantage of the cessation of hostilities to weaken ideological extremist elements within it.

If the U.S. misses this moment to double down support for Division 13 and its FSA allies, there may not be another opportunity before Al Qaeda embeds itself like a tick in Idlib’s civil society.