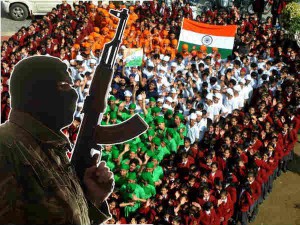 In the last decade or so, terrorism has evolved in unimaginable ways. There was a brief moment when everyone heaved a sigh of relief with the killing of Osama bin Laden. Most of the world thought Al-Qaeda was now history. It would be the end of global terrorism.

A little over five years after the dramatic killing of the Al-Qaeda chief, the group remains a potent threat to the world while a new far more vicious and brutal terrorist machine, the ISIS, now functions in most of the Middle East. At first ISIS, nurtured by the Saudis and Qatar, was thought to be a local Syria-Iraq territorial threat, meant to deal with the growing Iranian influence. Recent violent events have indicated that the ISIS has dramatically stepped up its campaign in Saudi Arabia, Egypt, Libya and Tunisia challenging the Al-Qaeda in these regions.

Terrorism thus remains as much of a strategic threat as it was in 2001. Today more states are affected by terrorist activities; more states are directly or indirectly involved in supporting or sustaining terrorist activities. There are more terrorists, more capable terrorist groups and the threat itself has become multi-dimensional. Needless to say, the task of tackling this menace has become even more difficult than the past for counter-terror agencies and for governments.

State sponsorship of international terrorism was first invoked as a strategic weapon to defeat a strong opponent through asymmetric warfare in the 1990s in Afghanistan. It has become fashionable since then as a force equaliser in some cases (against India) or force multiplier against others (in the Arab world).

The world today is witnessing the rise and expansion of a radical totalitarian ideology which inspires the Al-Qaeda, ISIS, Hezbollah, Hamas, Jabhat al-Nusra, Hizb ut-Tahrir, Lashkar-e-Tayyeba, Jaish-e-Mohammed, Harkat-ul-Jihad-Islami, the Taliban, Tehrik-e-Taliban Pakistan, Lashkar-e-Jhangvi (Ahle Sunnat Wal Jamaat) and scores of others. These groups do not operate in splendid isolation nor does the rest of the population remain immune from their activities. There are reports of co-operation amongst these groups from time to time. Over time and out of fear or conviction, there is interaction between the population that hosts them or where these radicals live. It is much worse or more insidious when the state intervenes in support of such elements.

Meanwhile, the West Asian regimes are more concerned with what Iran might do rather than what the ISIS is actually doing to them. This is the kind of attitude that will make countering terror all the more difficult.

It is obvious to all of us that the Muslim world is in ferment. It is true also that the majority is opposed to the violence and the tenets these terrorists follow. In a study by the US Congressional Research Service, only three percent of the Muslims understand Islam in militant terms. But if there are 1.6 billion Muslims today, this three percent still makes it 48 million who believe in religious intolerance who wish to overwhelm the opposition through unmitigated violence. Not a happy or comforting thought.

There are two epicentres of terrorism today. One is in the AfPak region, a byproduct of the Cold War, from where terrorism has long flown in all directions reaching as far as the United States and Europe. While the ‘global war on terror’ may have subdued some aspects of this, it remains very much an epicentre of terrorism.

Another epicentre which has risen in the recent times is in West Asia, which in some ways represents the first post-Cold War conflict between various competing forces. This turmoil affects both the West and us in India in more ways than one.

The main characteristics of today’s terrorism are –

Terrorist ideology is finding more acceptance among more people and communities than say a decade ago. Religious extremism, both in word and practice, is seeping into otherwise liberal societies across the world.

More states are disintegrating (Iraq, Libya, Yemen, possibly Syria in the near future) or are in the perpetual state of flux (like Nigeria, Pakistan and Afghanistan, and even Bangladesh and Myanmar), while others like Maldives and parts of Africa are increasingly getting affected.

Terrorists and volunteers from Europe and elsewhere in disturbingly large numbers have been going to the Zone of Conflict in West Asia.

Existing threats to South Asia and to India

South Asia faces a terrorist threat that has never been greater even though for the present it may seem at a low ebb with West Asia and Africa taking centre stage. Nevertheless, the subcontinent, home to over one-third of humanity, mostly poor, has more terrorist groups and terrorists than any other part of the world. Over the last thirty years, more lives have been lost to terrorist attacks here than anywhere else in the world.

Countries in the region like Afghanistan, Pakistan and Maldives face serious existential threats from a mix of terrorist groups active in the region and elsewhere. India has its share of terrorist activist attacks here than anywhere else in the world. Pakistan and parts of Afghanistan remain an ‘epicentre’ of transnational terrorism for decades and Pakistan’s attitude towards India has shown no change. It has long believed in what it thought was a smart and a financially sound policy of encouraging asymmetric war against bigger India through expendable jihadis that tied down the mighty Indian Army.

A significant part of recent terrorist violence can be attributed to Al-Qaeda and ISIS and their allies. It is not a secret that the threat from Al-Qaeda to the region, and the world, is far from over. Today, not only is Al-Qaeda alive, so are the Taliban, Haqqani Networks harboured in Pakistan and the Lashkar-e-Tayyeba and Lashkar-e-Jhangvi supported by the Pakistani state, and all of whom have cooperated and helped the Al-Qaeda in the past.

One does not see any reason for this to have changed in the past few years or hope that this will change in the future. In fact, the situation is expected to get much worse, should the ISIS find a foothold inside Afghanistan and Pakistan. There are increasing indications that this indeed might be so.

The Al-Qaeda was certainly militarily degraded post 9/11. The killing of Osama on May 2, 2011, was presumed to be the end of Al-Qaeda. This has turned out to be a false hope. Al-Qaeda has regrouped, changed its method of operations; it has also reinvented itself in the subsequent years, choosing to play a more advisory role rather than running the operation on its own.

The Al-Qaeda core today survives on franchise and its brand equity and remains a force in its original home in AfPak border area. In West Asia, it had found new ways of working with affiliates in the Arab Peninsula (AQIP), the Maghreb (AQIM) and in Syria and Iraq through Jabhat al-Nusra.

Statistics show that the threat from Al-Qaeda is far from over. For instance, in 2012, over 5000 persons were killed in various terrorist attacks in the world, most of them were carried out by Al-Qaeda affiliates in West Asia and Afghanistan.

Al-Qaeda showed its resilience when in September 2014 it set up a new chapter for the Indian Subcontinent (AQIS). Al-Qaeda chief Ayman al-Zawahari, in his statement, in 2012 announced that the group would be used for worldwide recruitment and operations.

However, the sudden and spectacular rise of the ISIS as a rival to Al-Qaeda, their brutal efficiency and zeal have led to some analysts seek more answers about their rise and generous financial and material support beyond that which has come from the Saudis, Qataris and Turks. The recent massive attacks by ISIS in Tunisia, Egypt, Syria Iraq and the bombing in a Saudi mosque confirm their presence, local support and ability in these regions and an attitude of defiance and arrogance towards the local authorities. Often they descended to levels of depravity and violence that has been unheard of for decades.

There are many unanswered questions about the sudden and spectacular rise of ISIS. It seems to be part of shock and awe, reaction to what the Americans have attempted in keeping with their policy of control of the region, where OPEC versus US commercial strategic interests, CENTCOM forces with 20 bases in six countries in the region and now Islamic versus Christian interests overlap.

Today, the ISIS has its wilayats in Libya, Algeria, Sinai, Saudi Arabia and Yemen. It has a presence in the Khorasan province of Afghanistan (although knowledgeable Afghans deny this vehemently) and support from breakaway factions of the TTP in Pakistan. Its soldiers look more like special forces troops than guerrilla fighters; ISIS is financially well-endowed with funds coming in from local powers as well.

India needs to be watchful not fearful

Terrorism in West Asia can essentially impact on India in three ways – continued use of its existing terrorist assets under a nuclear umbrella by Pakistan against India; radicalisation of the Indian Muslim youth; and attempts by ISIS and Al-Qaeda acting separately and in competition to expand their influence in India and other parts. So far, we have not seen any radicalisation among the youth in India barring a few examples but this need to be watched even though the Indian Muslim is by far the most moderate as a category in the region and does not get swayed by events outside the country. While there is no denying that Muslim radicals the world over are on an overdrive to recruit, it is possible some Indians here or in the Gulf may succumb in this age of the Internet. So far, there has been no such exodus but the intelligence and security agencies would remain concerned.

Radicalisation through the Internet and the social media where all these terrorist organisations run many highly active very professional websites and innumerable social media and Facebook accounts is a growing problem for all counter-terrorists organisations. The indoctrination techniques are persuasive and professional. It is impossible to put up a virtual wall against these inroads.

The Indian authorities would remain more concerned with the activities of Pakistan-based terror groups some of whom have links with Saudi Arabia and have also associate offices/branches in the Gulf. Our perceived and recent closeness to the US and Israel is bound to attract notice among the Islamists but this is something the country has to be prepared for.

The real threat we face is from all terror groups that have their bases in Pakistan. This means chiefly LeT, JeM or in Afghanistan from the Haqqanis. It is these groups fired by the rhetoric of the likes of Hafiz Saeed or Munawar Hasan, backed to the hilt by the Pakistan Army operating from safe havens in Pakistan that will remain the real threat.

The ISIS has no known operational base in Pakistan although there are stray reports about its presence. It can only operate in India if it has local logistic support both in Pakistan and India. It would suit Pakistan to let it be believed that the ISIS/AQ are responsible for these attacks as this absolves their own organisations of charge of terror in India. The ISIS and/or Al-Qaeda will become a real threat to us only if they have the same kind of back up from the Pakistan Army.

The views expressed in the above article are that of Mr. Vikram Sood, former Secretary R&AW, Government of India, and currently an advisor to the New Delhi-based Observer Research Foundation.