You are here: Home / MidEastGulf / Al-Qaeda in Yemen launches a ‘hearts and minds’ campaign
Locals told that Al-Qaeda’s Yemen branch have rebranded themselves as more populist... 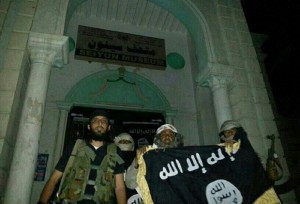 Three years after they were kicked out of several cities in south Yemen, al-Qaeda in the Arabian Peninsula (AQAP) has come back and overrun two cities in the province of Abyan, local government officials and residents told Middle East Eye. But people who lived through al-Qaeda’s reign of Abyan in 2011 now talk about new “tolerant and friendly” militants.

In Zinjibar, the capital of Abyan province, a government official who spoke on condition of anonymity because of security concerns, said that early this month al-Qaeda militants quietly stormed military camps and police stations in the city without even drawing the attention of students in schools or public servants in their offices.

“Zinjibar is quiet. People are busy with their daily life,” the government officials said.

Many provinces in southern Yemen have been in a state of anarchy since the Saudi-backed forces and local tribesmen drove out the Houthis. Then separatists and Islamists aligned with the Saudi-backed forces failed to fill the vacuum left by Yemeni soldiers who headed north to fight the Houthis. So Al-Qaeda came in and took the place of the former government-run security agencies.

According to the government official, an alliance of convenience emerged between the militants and local fighters when Houthis seized many districts in Abyan. The two armed parties agreed to halt hostilities and collectively fight their common enemy, the Houthis before the Saudi-led coalition kicked them out.

The official said that al-Qaeda militants who are running his city now are less radical and less pushy about enforcing Sharia laws than those who controlled it in 2011.

“They did not raise their flags or execute soldiers. The militants also allowed government officials to operate in the city, schools are open and soldiers are moving freely in the streets of Zinjibar,” he told MEE.

In 2011, as the regime of the country’s former long-serving president Ali Abdullah Saleh was battling nationwide protests that sought to unseat him, al-Qaeda benefited from rifts within the army and seized three main cities in the south, Zinjibar and Jaar in Abyan province and Azzan in Shabwa province.

Nowadays, instead of spending their days chasing intelligence officers or those who play music, al-Qaeda in Zinjibar has embarked on a “hearts and minds” campaign to convince people to embrace their rule. They have arranged social gatherings to inform residents about their movement and why they decided to surface in the city.

To the astonishment of the locals, the militants have even rebranded themselves as the Sons of Abyan.

“They are acting like election campaigns,” the official said.

In Jaar, a current al-Qaeda stronghold in Abyan which the group also held in 2011, the situation is no different from neighbouring Zinjibar. The militants seized Jaar in late October according to Anwar Al Hadhrami, a local journalist who told MEE that the militants are trying as hard as they can to convince people to accept them.

“The situation is normal and quiet. Al-Qaeda did not harass people like what they did in 2011,” Al Hadhrami said.

On Sunday, Al Hadhrami said, the militants are not visible in the streets or in public offices. There is no sign of their presence in the city except their station inside the ruins of a former military site that they made into a base of operations.

“It is difficult to tell for sure whether they are al-Qaeda militants or another group,” Al Hadhrami said.

Despite confirmation, the governor of Abyan, Al Khedher Al Saidi, has strongly denied about the group’s strong presence in his province, talking about his recent visits to the two cities.

“The governor has been based in Aden since 2011. The militants turn a blind eye to his brief forays into Zinjibar,” the official said.

Despite their friendly approach with the public, some residents said that the militants have chased senior leaders of the Popular Committees, a gathering of tribesmen who backed government army troops who drove al-Qaeda out Abyan and Shabwa in 2012.

Abdul Lateif Al Sayed, the leader of the Popular Committees, fled Zinjibar to another district in Lahj Province, after the militants killed his deputy Ali Sayed and dragged his body in the streets of Zinjibar on 2 December according to Mafoud Fara’a, a separatist figure in Abyan.

Since April, al-Qaeda militants have controlled the port city of Mukalla, the capital of Hadramout, one of most economically and politically important cities in Yemen. The militants quietly expanded their influence into adjusting smaller towns like Sheher and Ghayl Bawazer.  As in Abyan, the militants rebranded themselves as the Sons of Hadramout.