AQAP leader says diplomatic crackdown on Doha amounts to war ‘war against Islam and Muslims’, like reported by ibtimes.co.uk 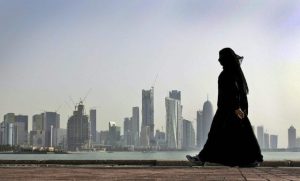 Amid the diplomatic isolation from the Arab world partners, Qatar seems to have found a new voice of support from the al-Qaeda in the Arabian Peninsula (AQAP), the Islamist group centred in Yemen. The extremist group is believed to have said the diplomatic crackdown on Doha is a “war against Islam and Muslims”.

Several Gulf nations led by the Middle East Sunni heavyweight Saudi Arabia had earlier announced they are snapping ties with Qatar, saying the energy-rich Emirati state is funding terrorism. The move has caused one of the worst diplomatic meltdowns in recent years in the region with multiple states being forced to take a side.

The AQAP’s senior leader Khalid Batarfi has lent his support for Doha, condemning the actions of Saudi Arabia, Bahrain, Egypt and Yemen.

“We advise all of those who flattered the tyrants and justified their crime to fear God and regret their actions. The tyrants don’t believe in the channels of communications,” said Batarfi, according to a report carried by the Saudi kingdom-funded Al Arabiya, the pan-Arab news network.

He then went on to say the Islamic movements across the world should “incite and encourage the jihad and dismiss nationalist patriotic sentiment”. There is still no independent confirmation on the authenticity of Batarfi’s remarks or AQAP’s open support for Qatar.

Qatar had been accused of having close links with the Muslim Brotherhood, the outlawed group labelled a terrorist outfit in Egypt, and this is being cited as one of the reasons for the diplomatic campaign against Doha.

Multiple world leaders have been attempting to mediate negotiations between Qatar and Saudi-led countries to ease the tense situation in the Gulf region though there is no credible solution in sight so far. In the latest, Prime Minister Theresa May has also exhorted “all sides to urgently de-escalate the situation, engage meaningfully in dialogue, and restore Gulf Cooperation Council unity at the earliest possible opportunity”.