You are here: Home / Senza categoria / Al-Qaeda first in the world to congratulate Erdoğan

The Syrian arm of Al-Qaeda, the gang group Ahrar Al-Sham congratulated Turkish President Erdoğan for the referendum and called him “Brother”, like reported by anfenglish.com 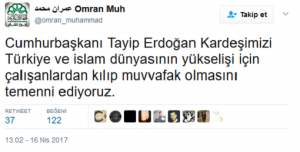 The message shared by gang group Ahrar Al-Sham is as follows:

“We congratulate our brother President Tayyip Erdoğan and wish him success in his efforts to lift up Turkey and the Islam world.”