You are here: Home / MidEastGulf / Al-Qaeda fighters to be evacuated from Lebanon-Syria border 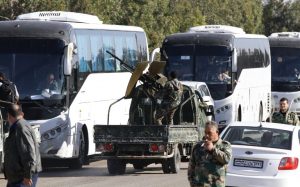 Scores of buses and ambulances have arrived at the Lebanon-Syria border for the second round of an exchange between Lebanon’s militant Hezbollah group and Syria’s al-Qaida affiliate, like reported by ap.org.

The second round is planned to have about 9,000 Syrians, including hundreds of al-Qaida fighters, resettle in their home country of Syria. In exchange, eight Hezbollah fighters held by al-Qaida’s Fatah al-Sham Front will be returned home

The government-controlled Syrian Central Military Media released video and photos of the buses and ambulances in the Lebanese border town of Arsal and the Syrian village of Fleeta preparing for the evacuations.

Monday’s evacuations come a day after the two groups exchanged the bodies of their dead fighters as part of an agreement to restore order to a contested frontier zone.