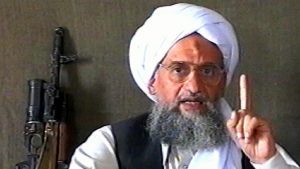 Al Qaeda leader Ayman Al Zawahiri has appeared in a new video defending the Muslim Brotherhood, and calling on Muslims to unite and focus their ire on the US, like reported by thenational.ae.

In the video entitled “America is the First Enemy of the Muslims”, Al Zawahiri is clad in white robes and gestures dramatically with his arms whilst speaking to camera.

The video begins with a clip of Saudi Crown Prince Mohammed bin Salman’s recent interview on US television in which he vowed to clamp down on what “remained of the Muslim Brotherhood’s ideologies that invaded Saudi schools”. In the video Al Zawahiri claims that the United States is “working with Saudi Arabia to train imams and rewrite religious textbooks”.

He has previously written positively of Sayid Qutb, the founder of the Muslim Brotherhood, in his book ‘Knights under the Prophet’s Banner’.

In the video, Al Zawahiri calls on Muslims “to unite around confronting America”. The video was the Al Qaeda chief’s sixth of 2018, and in a sign of how recently it was filmed, he refers to former US Secretary of State Rex Tillerson as “fired”. Mr Tillerson was ousted as the US’ top diplomat on March 13th.

Al Zawahiri emerged as the jihadist group’s head after the 2011 death of Osama Bin Laden.