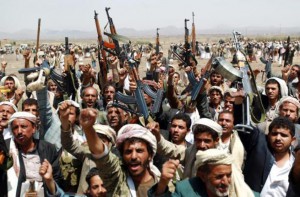 Al-Qaeda militants have taken control of a police headquarters in southern Yemen, amid the chaos that has gripped the country following the onset of Saudi Arabia’s military aggression.

The militants on Saturday overran the headquarters in Zinjibar, the capital of Abyan Province, after forces loyal to the embattled president of Yemen, Abd Rabbuh Mansur Hadi, reportedly escaped the area.

The militants have been in control of other government buildings in Zinjibar for weeks while retaining a large presence in the nearby town of Jaar. They have also taken control of the town of Azzan in Shabwa Province and seized the towns of Shoqra and Ahwar, which enable them to completely control the coast road between their stronghold city of Mukalla in the southeast and Zinjibar.

Zinjibar is located about 50 kilometers (30 miles) from Yemen’s major city of Aden, which houses elements of Yemen’s former government after the capital, Sana’a, was taken by the Houthi movement’s fighters in September 2014.

Yemen has been under military attacks by Saudi Arabia since March 26, 2015. The campaign has been meant to bring Hadi, a Riyadh ally, back to power.

Over 8,270 people, among them more than 2,230 children, have been killed and some 16,000 others injured since. The strikes have also taken a heavy toll on the impoverished country’s infrastructure, destroying many hospitals, schools, and factories.

The Yemen-based al-Qaeda in the Arabian Peninsula (AQAP) has exploited the volatile conditions and the breakdown of security in Yemen since the beginning of the Saudi war to tighten its grip on parts of southeastern Yemen.

The Daesh group has also gained ground in and around Aden.

Houthi fighters, along with allied army units, are fighting the Daesh militants. They are also engaged in attacks targeting positions of Saudi forces.