You are here: Home / MidEastGulf / Al Qaeda captures airport in Yemen as UN calls for peace 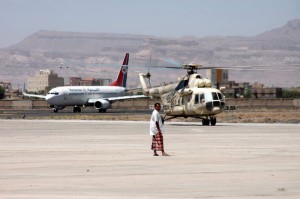 Militants belonging to Yemen’s powerful al Qaeda branch in the region took control over a provincial airport, an oil terminal, and a major military base, according to AP.

The terrorist group’s representatives also made an alliance with local tribal leaders to administer the region.

“The military unit in charge of security at the facility withdrew without resisting,” an airport official said.

Al Qaeda in the Arabian Peninsula (AQAP) now controls almost all of port city of Mukalla, which is the capital of the southeastern province of Hadramawt and home to some 200,000 people.

An activist from the city, Nasser Baqazouz, warned of the extremist fighters’ advance.

“They are consolidating their hold of the city and will paralyze the whole coast of Hadramawt,” he said.

AQAP fighters have reportedly turned a cultural center in Mukalla to an Islamic religious court and set up squads to keep law and order.

Airstrikes to put Hadi back to power

A spokesman for the Saudi-led coalition, Ahmed Asiri, said the bombing, which started in late March, is directed against the Shiite rebels – not al Qaeda militants.

“The goals of the [operation] are clear, which is to support the legitimacy of President Abed Rabbo Mansour Hadi, support efforts to restore peace and stability and prevent the Houthi militia from harming Yemenis and neighboring countries,” Asiri told journalists in Riyadh.

Fighting al Qaeda requires different strategies than that of the current operation, Asiri said, while implying that such a fight could come later.

“Once there is a secure and stable Yemen that is able to impose order, there will be no room for al Qaeda,” he told the Saudi-owned Al-Arabiya Al-Hadath TV station.

United Nations General Secretary Ban Ki-moon, meanwhile, appealed for urgent halt to fighting in the Arab country on Thursday, saying that Yemen is “in flames”

“I am calling for an immediate ceasefire in Yemen by all parties,” Ban said at a National Press Club dinner in Washington. “It is time to support corridors for lifesaving aid and a passage to real peace.

“The United Nations-supported diplomatic process is the best way out of a drawn-out war with terrifying implications for regional stability,” he added.

This is the first time Ban made a plea since coalition airstrikes began three weeks ago.

UN special envoy to Yemen Jamal Benomar resigned Wednesday, allegedly under pressure by Arab countries which believed he was being too accommodating to the Houthi rebels.