You are here: Home / Analysis / Al-Qaeda capitalizing on Islamic State losses in Syria

Syrian groups affiliated with al-Qaeda are capitalizing on the U.S.-led coalition as well as the Iran and Russian-backed Syrian regime’s nearly single-minded focus to annihilate the Islamic State (ISIS/ISIL) in the war-torn country, like reported by breitbart.com 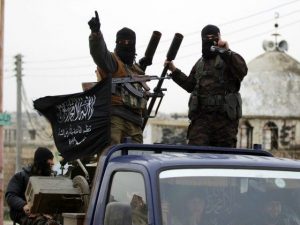 The U.S.-led coalition, forces loyal to Syrian dictator Bashar al-Assad, and the mainly Iran-backed allied militias have attacked both ISIS and its rival al-Qaeda. They have killed some of their high-ranking leaders, pushed them out of Syrian territory, and prevented them from completely seizing the country’s capital Damascus.

However, the anti-jihadist efforts have long primarily focused on ISIS, allowing al-Qaeda to fully replenish and at times exceed their losses while their enemies continue to fight each other.

Al Qaeda’s affiliates in Syria have begun gaining ground in the central part of the country, taking advantage of the regime’s increased focus on the ongoing fight against Islamic State in northern Syria.

Fighters from Hay’at Tahrir Al-Sham, a faction of the former Syrian al Qaeda cell now known as Jabhat Fateh al-Sham, have overrun government forces in the central Syrian cities of Qomhana and Ma’an, 30 miles south of anti-government stronghold of Idlib, according to local reports.

As early as June of last year, former American special envoy for the U.S.-led coalition against ISIS, Brett McGurk, acknowledged that ISIS at the time was already losing territory, fighters, leaders, and financial resources.

The Yemen-based al-Qaeda in the Arabian Peninsula (AQAP) is also benefiting from a similar situation like the one facing their counterparts in Syria.

While the U.S. intelligence community has long described AQAP as the most strong and dangerous wing of the terrorist group, the former American president’s special envoy has identified the Syrian branch as the “largest” al-Qaeda affiliate “in history.”

Together, both Sunni terrorist group would at the very least appear to be a formidable enemy that may outlast ISIS.

Perhaps to divert attention from claims that it had reached unprecedented strength, Jabhat al-Nusra declared in July that it was no longer affiliated with al-Qaeda after renaming itself Jabhat Fateh al-Sham (JFS).

Voice of America (VOA) noted that various analysts dismissed the name change as a “feint” to their opponents, rather than a real decision to drop its links to al-Qaeda.

JFS also intends to establish its own caliphate by announcing “officially an emirate in territory it controls in northern Syria, mainly in the province of Idlib to the west of the besieged city of Aleppo,” explained VOA.

With ISIS allegedly on its last legs in both Iraq and Syria, the time for al-Qaeda to officially establish its territory may be fast approaching,

“Syrian President Bashar Assad has begun diverting his forces from battling rebel fighters in central Syria to territory held by Islamic State, or ISIS or ISIL,” notes the Washington Times. “The ensuing vacuum has allowed al Qaeda-affiliated groups to push into rebel-held territory near Idlib and Hama.”

“It remains unclear how far the group’s Syrian cells will push unchecked by Damascus into rebel territory. But those efforts in Syria fall in line with al Qaeda’s recent resurgence in Yemen, west Africa, Afghanistan and elsewhere,” it adds.

President Donald Trump’s administration has ramped up military efforts against both ISIS and al-Qaeda, particularly bombing the Yemen-based AQAP.

Meanwhile, the Iran and Russia-backed Assad forces have also intensified their offensive against the two jihadist groups.