You are here: Home / Europe / Al-Qaeda calls for more lone wolf attacks on the US, France 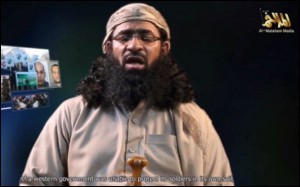 Al-Qaeda in the Arabian Peninsula (AQAP) on released a video on Tuesday calling for lone wolf attacks in the United States, France and other “disbeliever” nations.

The jihadist monitoring group SITE Intelligence said the video praised the alleged gunman in an attack last month in the southern state of Tennessee that killed four US Marines and one Navy sailor.

“And as you put limits to freedom of expression and punish whomever goes against them, it is upon us to punish whoever transgresses our boundaries and sanctities,” said Batarfi, who was freed in April from a Yemeni prison.

In praising 24-year-old Muhammad Youssef Abdulazeez, the alleged gunman in the killing of the US Marines and sailor on July 16 in Chattanooga, Tennessee, Batarfi noted that the attack occurred in the heart of the United States.

“He penetrated the base, killing and injuring American Marines in a blessed jihadi operation,” Batarfi said.

Abdulazeez was killed at the scene, most likely by gunfire from responding police, according to the FBI, which is investigating the incident as a terrorist attack.