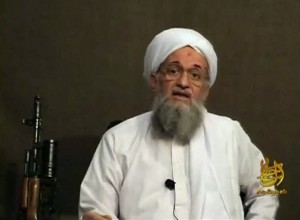 Al-Qaeda chief Ayman al-Zawahiri has urged all Muslims to join the fight against Western powers and Russia. The top militant, in an audio recording that surfaced on 1 November, has said jihadists should come together in confronting the united forces in Syria and Iraq.

“The Americans, Russians, Iranians, Alawites, and Hezbollah are coordinating their war against us — are we not capable of stopping the fighting amongst ourselves so we can direct all our efforts against them?” asked Zawahiri, who took over the leadership of al-Qaeda from slain leader Osama bin Laden.

It was unclear when or where exactly the audio was recorded but the footage surfaced on cyberspace through usual jihadist channels on 1 November, a day after Flight 7K9268 crashed in Egypt’s Sinai peninsula killing all 224 passengers and crew members aboard. Zawahiri’s tone indicates the remarks were made in the backdrop of Russia beginning airstrikes in Syria against Islamist targets.

“My mujahideen brothers in all places and of all groups … we face aggression from America, Europe, and Russia … so it’s up to us to stand together as one from East Turkestan to Morocco,” he is heard saying in the audio.

In a similar audio recording released in September, the al-Qaeda leader called the IS illegitimate and called the group’s chief Abu Bakr al-Baghdadi not the “caliph”. The two extremist groups have been competing against each other in recruiting jihadists and establishing their dominance in Middle East conflict zones.