You are here: Home / MidEastGulf / Al-Nusra, not ISIS, is Assad’s top priority 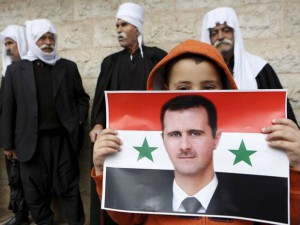 Since the onset of the war in Syria the regime of President Bashar al-Assad has portrayed his fight as combating Islamist terrorist gangs in his country. His ally Moscow has backed him up on these claims and urged the United States-led coalition to work with Damascus when it comes to conducting their operations against Islamic State (ISIS) in Syria. The U.S. to date has declined and continues to denounce the Assad regime as wholly “illegitimate”.
Russia has recently sent a small number of forces and equipment to a base in western Syria. Amidst speculations about the nature of the deployment Moscow once again insisted that the U.S. team-up with Assad in the fight against ISIS. Russia’s Foreign Minister Sergei Lavrov even went so far as to say it was “absurd” for the U.S. to be targeting ISIS in Syria without working with the Syrian Army.
Similarly the Assad regime reached out to the Kingdom of Jordan last February to coordinate with Damascus against ISIS after the infamous burning alive of the Jordanian fighter pilot Muath Al-Kassasbeh. More recently Assad has reportedly said he is ready to “collaborate” with the Sunni Arab monarchies of the Persian Gulf, France and Turkey, provided it is against the Islamist terrorists in Syria.
That Russia would be talking about a U.S. anti-ISIS effort done in tandem with Damascus as it sends forces into Syria does raise an eyebrow. Is Russia hinting that it will help the U.S. with its anti-ISIS efforts in Syria if it in essence works with Assad?
The U.S. has clearly given up on any effort to topple the Syrian regime since it has no tenable alternative and is simply bombing ISIS wherever it can in that war-wrecked country. Assad is clinging to the remaining areas he controls in Syria’s west and south and his army has been down-sized to the point that its primary purpose now is to secure a rump state for Assad to survive on. Russia may well be sending in this small force to prepare the ground in Syria in case they ever need to intervene more directly and robustly to prop-up or save Assad.
What’s particularly interesting however, is the current strategic situation. Damascus and Moscow have been portraying the Syrian fight as a mere counter-terrorism effort from the get-go (as opposed to the brutal crushing of a popular grassroots revolt). The situation since that time has certainly devolved and deteriorated to the point where it’s not all that uncommon to hear arguments that Assad should be supported as the lesser evil in this fight. The Independent newspapers’ Patrick Cockburn even suggested that working with Assad against ISIS, as unscrupulous a dictator he might be, could in fact be the best way to bring down his regime in the long run since the threat of such Islamist’s are what is solidifying the support he receives from Syria’s, understandably, terrified minority communities.
It’s doubtful however that Assad and/or Russia’s first order of the day is to crush ISIS. But in fact the, almost as bad, al-Qaeda affiliated Jabhat al-Nusra group. In an interview last week Assad once again claimed that his main goal is “defeating terrorism” in Syria. He didn’t, notably, specify nor single out ISIS. Accordingly when he expressed willingness to “collaborate” with the Gulf States and Turkey he said such collaboration would be conditioned upon them forgoing their support for Islamists. Which is quite possibly an indirect reference to al-Nusra who some of those countries have indeed been backing against his forces in Syria.
ISIS has seized territory spanning from Syria’s northeast toward the center and has carried out attacks in the Hama Province and even on the capital Damascus. But the land it occupies is primarily to the northeast where they are being bombed by American jets and are fighting against Syrian Kurdish forces. It’s doubtful Assad can retake the northeast of his country anytime soon. Indeed since August 2014 there has been a limited Syrian Army presence in that part of the country.
To secure the emergent rump state Assad would have to reverse what has arguably been his biggest strategic setback this year to date. The fall of Syria’s northwest province of Idlib to an umbrella Islamist group, the so-called ‘Army of Conquest’, which includes al-Nusra. Idlib borders Hama and Latakia Province and is of instrumental importance to the survival and longevity of this rump state. Indeed al-Nusra’s siege of two Shia-majority towns in Idlib was the subject of negotiations between the two sides (al-Nusra has forces who are cut off and under siege by the regime and Hezbollah in the resort town of al-Zabadani near Damascus) which even saw to a suggested land-swap which would have allowed safe-passage of those Shia populations south to Assad-held territory in return for the lifting of the siege on al-Nusra forces holed-up in Zabadani.
Such negotiations indicated just how Idlib’s fall has proven to be a major setback and general thorn in the side of Assad. Which is why, if he can, he will take the first chance he gets to retake it from those Islamists.