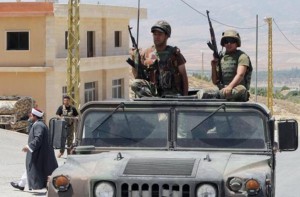 Al-Nusra Front has warned the Lebanese government that it will kill all military servicemen in its custody, if the Lebanese army continues to shell its positions on the outskirts of Arsal, the daily An Nahar reported on Tuesday.

Al-Nusra dispatched the message through a mediator from the Lebanese army, saying “if shelling on the outskirts of Arsal continues, we will kill the soldiers one after another.”

In August 2014, the area has witnessed extensive clashes between the army, the Islamic State and al-Nusra Front killing 20 soldiers, 16 civilians and scores of militants.

Moreover, more than 25 soldiers have been taken hostage by the militants. The Islamic State beheaded two soldiers while al-Nusra executed another two.

To free the soldiers, al-Nusra demands an exchange with Islamic inmates at Roumieh prison.