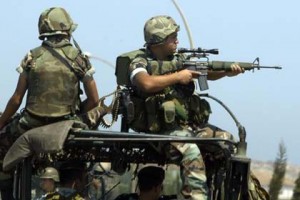 An al-Nusra Front official has revealed that the Islamic State extremist group is plotting a terrorist attack in northern Lebanon in the coming weeks, As Safir daily reported on Monday.

The newspaper said the official claimed on his Twitter account that the IS is planning for “a huge operation against the Lebanese army” in the northern city of Tripoli at the start of the holy month of Ramadan.

The militant, who is known by the name of Abou Mohammed Saleh al-Hamwi, used to hold a top post in the Syrian province of Hama, said As Safir.

He stressed he had information that the attack would be carried out by the Iraqi Abu Qatada who has entered Lebanon from the Syrian province of Raqqa and has activated some sleepers cells in the North.

The IS’s threat first came to Lebanon in August last year, two months after the group’s summer blitz in which it seized large swaths of territory in Iraq and Syria.

In a surprise attack, IS and al-Nusra Front militants crossed over from Syria and overran the Lebanese border town of Arsal, hitting Lebanese army positions and taking with them soldiers and policemen captive.

The militants and their backers mainly in north Lebanon have carried out several attacks on the army since then.