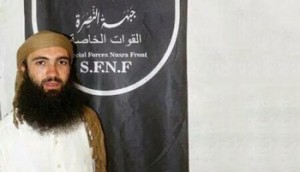 Abu Hamza al-Zoubi, the leader of Shura Council in al-Nusra Front terrorist group – Al-Qaeda branch in Syria, was killed in a suicide attack he carried out in Sahl al-Ghab (valley of the forest) region in Syria, sources in the Lebanese Northern region in Tripoli city announced Tuesday.

“Now, I will take a rest from the group’s problems and internal splits, and will determine my destiny myself,” Zoubi said in his latest post on online social accounts.

Moreover, sources revealed that more than 16 Lebanese were killed in regional fighting during the last 24 hours. No more details were elaborated fearing of possible reactions of their parents.

Less than 5 hours after Zoubi’s attack, Abu Omar Al-Lubnani (the Lebanese) – another operative within al-Nusra ranks — was announced killed in a suicide attack in the Iraqi city of Kirkuk.