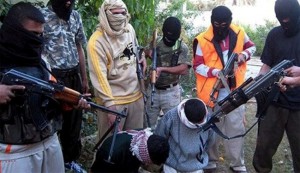 Members of al-Qaida’s affiliate in Syria have shot dead at least 45 soldiers captured from a base in northwestern Syria last week, activists said today.

Such killings of captured troops have been a common practice of the Islamic State group. However al-Qaida’s branch in Syria, known as the Nusra Front, has not carried out such mass killings in the past.

The Britain-based Syrian Observatory for Human Rights said 56 soldiers were killed in the Abu Zuhour air base that was captured by the Nusra Front and other militant groups on September 9.

Mohammed Kanaan, an activist based in Syria, said the Nusra Front shot dead 45 soldiers, adding that the “executions” took place yesterday on a runway in the air base.

The capture of the Abu Zuhour base was the latest in a series of setbacks for President Bashar Assad in Syria’s bitter civil war, now in its fifth year.

Syria’s embattled president has acknowledged the losses, saying the army has had to relinquish some areas in the north to be able to better defend core areas seen as more critical to the government.

The capture of Abu Zuhour also made Idlib the second of Syria’s 14 provinces to completely fall out of Syrian army control. Earlier this year, militant groups captured the provincial capital, also called Idlib, as well as other towns and villages.

The Observatory said the latest killings raise to 71 the number of government forces that have been killed since the capture of the air base.

The Nusra Front, which is a top rival of the Islamic State group, and other Islamic insurgents now control nearly all of Idlib province, except for the predominantly Shiite villages of Foua and Kfarya, which pro-government militiamen hold.

Nusra Front fighters and their allies began a large offensive against the two villages on Friday, deploying at least seven suicide bombers and firing hundreds of shells into Foua and Kfarya, according to the activists and the Nusra Front’s Twitter account.

The Nusra Front released photos from the outskirts of the villages showing what it said were fortifications that were captured by the militants.

More than 250,000 people have died in Syria’s civil war, according to UN officials.