You are here: Home / MidEastGulf / Al-Moallem: We are with every effort against ISIS. Zarif: Tehran will continue supporting Damascus in fighting terrorism 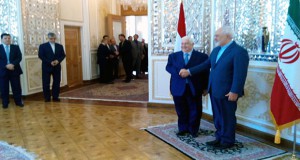 In a statement to the reporters and in response to a question about the US’s announcement of its intention to provide air support to what it calls “moderate opposition”, al-Moallem said “for us in Syria there is no such thing as moderate or non-moderate opposition. Whoever that takes up arms against the Syrian state is a terrorist.”

“The US contacted us before this group’s entry and said it was for fighting ISIS and not the Syrian army at all, and we said that we were with every effort seeking to fight ISIS, and that should be done through coordination and consultation with the Syrian government, otherwise it would be a violation of the Syrian sovereignty,” al-Moallem added.