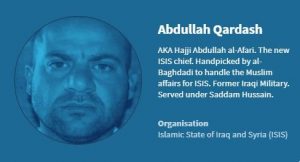 In the event of the death of the Islamic State’s self-styled caliph, Amaq, a news agency affiliated with the Islamic State, reported on 7 August 2019 that the terrorist organization’s chief Abu Bakr al-Baghdadi had appointed Abdullah Qardash as his successor, like reported by eurasiareview.com.

Abdullah Qardash is from Tal Afar, a predominantly Sunni Muslim city in northwestern Iraq, and has served as an army officer during Saddam Hussein’s regime. Besides Qardash, two other close aides who have emerged as al-Baghdadi’s likely successors over the years are Iyad al-Obaidi, his defense minister, and Ayad al-Jumaili, the in charge of security.

Al-Jumaili has already reportedly been killed in an airstrike in April 2017 in al-Qaim region on Iraq’s border with Syria, while the whereabouts of al-Obaidi are unknown. Both al-Jumaili and al-Obaidi have also previously served as security officers in Iraq’s Baathist army under Saddam Hussein.

Regarding the creation and composition of the Islamic State in Iraq and Syria, apart from training and arms which were provided to Syrian militants in the training camps located in the Turkish and Jordanian border regions adjacent to Syria by the CIA in collaboration with Turkish, Jordanian and Saudi intelligence agencies, another factor that contributed to the success of the Islamic State in early 2014 when it overran Raqqa in Syria and Mosul and Anbar in Iraq was that its top cadres were comprised of former Baathist military and intelligence officers from the Saddam era.

Reportedly, hundreds of ex-Baathists constituted the top and mid-tier command structure of the Islamic State who planned all the operations and directed its military strategy. The only feature that differentiated the Islamic State from all other insurgent groups was its command structure which was comprised of professional ex-Baathists and its state-of-the-art weaponry that was provided to all militant outfits fighting in Syria by the intelligence agencies of the Western powers, Turkey, Jordan and the Gulf states.

Recently, the Islamic State’s purported “terror franchises” in Afghanistan and Pakistan have claimed a spate of bombings against the Shi’a and Barelvi Muslims who are regarded as heretics by Takfiri jihadists. But to contend that the Islamic State is responsible for suicide blasts in Pakistan and Afghanistan is to declare that the Taliban are responsible for the sectarian war in Syria and Iraq.

Secondly, and more importantly, the insurgency in Afghanistan and the border regions of Pakistan is an indigenous Pashtun uprising which is an ethnic group native to Afghanistan and northwestern Pakistan, whereas the bulk of the Islamic State’s jihadists in Syria and Iraq was comprised of Arab militants and included foreign fighters from the neighboring Middle Eastern countries, North Africa, the Central Asian states, Russia, China and even radicalized Muslims from as far away as Europe and the United States.

The so-called “Khorasan Province” of the Islamic State in the Af-Pak region is nothing more than a coalition of several breakaway factions of the Taliban and a few other inconsequential local militant outfits that have pledged allegiance to the Islamic State’s late chief Abu Bakr al-Baghdadi in order to enhance their prestige, and draw funds and followers, but which doesn’t have any organizational and operational association with the Islamic State proper in Syria and Iraq.

The total strength of the Islamic State-Khorasan is estimated to be between 3,000 to 5,000 fighters. By comparison, the strength of the Taliban is estimated to be between 60,000 to 80,000 militants. The Islamic State-Khorasan was formed as a merger between several breakaway factions of the Afghan and Pakistani Taliban in early 2015. Later, the Islamic Movement of Uzbekistan (IMU), a Pakistani terrorist group Jundullah and Chinese Uyghur militants pledged allegiance to it.

In 2017, the Islamic State-Khorasan split into two factions. One faction, based in Afghanistan’s eastern Nangarhar province, is led by a Pakistani militant commander Aslam Farooqi, and the other faction, based in the northern provinces of Afghanistan, is led by a former Islamic Movement of Uzbekistan (IMU) commander Moawiya. The latter faction also includes Uzbek, Tajik, Uyghur and Baloch militants.

In Pakistan, there are three distinct categories of militants: the Afghanistan-focused Pashtun militants; the Kashmir-focused Punjabi militants; and foreign transnational terrorists, including the Arab militants of al-Qaeda, the Uzbek insurgents of Islamic Movement of Uzbekistan (IMU) and the Chinese Uyghur jihadists of the East Turkistan Islamic Movement (ETIM). Compared to tens of thousands of native Pashtun and Punjabi militants, the foreign transnational terrorists number only in a few hundred and are hence inconsequential.

Tehreek-e-Taliban Pakistan (TTP), which is mainly comprised of Pashtun militants, carries out bombings against Pakistan’s state apparatus. The ethnic factor is critical here. Although the Pakistani Taliban (TTP) like to couch their rhetoric in religious terms, it is the difference of ethnicity and language that enables them to recruit Pashtun tribesmen who are willing to carry out subversive activities against the Punjabi-dominated state apparatus, while the Kashmir-focused Punjabi militants have by and large remained loyal to their patrons in the security agencies of Pakistan.

Although Pakistan’s security establishment has been willing to conduct military operations against the Pakistani Taliban (TTP), which are regarded as a security threat to Pakistan’s state apparatus, as far as the Kashmir-focused Punjabi militants, including the Lashkar-e-Taiba and Jaish-e-Mohammad, and the Afghanistan-focused Quetta Shura Taliban, including the Haqqani network, are concerned, they are still enjoying impunity because such militant groups are regarded as “strategic assets” by Pakistan’s security agencies.

Therefore, recent allegations by regional power-brokers that Washington has provided material support to the Islamic State-affiliate in Afghanistan and the Pakistani Taliban (TTP) as a tit-for-tat response to Pakistan’s security agencies double game of providing support to the Afghan Taliban to mount attacks against the Afghan security forces and their American backers cannot be ruled out.

In November last year, for instance, infighting between the main faction of the Afghan Taliban led by Mullah Haibatullah Akhunzada and a breakaway faction led by Mullah Mohammad Rasul left scores of fighters dead in Afghanistan’s western Herat province.

Mullah Rasul was close to Taliban founder Mullah Mohammad Omar, and served as the governor of southwestern Nimroz province during the Taliban’s rule in Afghanistan from 1996 to 2001. After the news of the death of Mullah Omar was made public in 2015, Mullah Rasul broke ranks with the Taliban and formed his own faction.

Mullah Rasul’s group is active in the provinces of Herat, Farah, Nimroz and Helmand, and is known to have received arms and support from the Afghan intelligence, as he has expressed willingness to recognize the Washington-backed Kabul government.

Regarding Washington’s motives for providing covert support to breakaway factions of the Afghan Taliban, the Pakistani Taliban and the Islamic State’s affiliate in Afghanistan, the US invaded Afghanistan in October 2001, in the aftermath of the 9/11 terror attack, and toppled the Taliban regime with the help of the Northern Alliance comprised of ethnic Tajik and Uzbek warlords.

The leadership and fighters of the Pashtun-majority Taliban resistance movement found sanctuary in Pakistan’s lawless tribal areas bordering Afghanistan, and mounted an insurgency against the Washington-backed Kabul government. Throughout the occupation years, Washington kept pressuring Islamabad to mount military operations in the tribal areas in order to deny safe havens to the Taliban.

However, Islamabad was reluctant to conduct military operations, which is a euphemism for all-out war, for the fear of alienating the Pashtun population of the tribal areas. After Pakistan’s military’s raid in July 2007 on a mosque (Laal Masjid) in the heart of Islamabad, which also contained a religious seminary, scores of civilians, including students of the seminary, died.

Keeping this background of Washington’s covert support to breakaway factions of the Afghan Taliban that have waged an insurgency against the US-backed Kabul government and to the Pakistani Taliban that has mounted a guerrilla war against Pakistan’s state establishment in mind, the allegations that Washington has provided material support to the Islamic State’s affiliate in the Af-Pak region in order to divide and weaken the Taliban resistance against American occupation of Afghanistan are not unfounded.