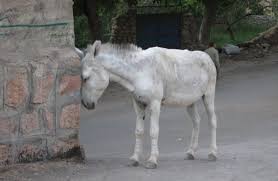 The photos of ISIS leader Abu Bakr al-Baghdadi were placed on donkeys in the city of Mosul, while ISIS militants pursue the donkeys to kill them, al-Sumaria News reported Tuesday.

The news website stated, “Unidentified persons put the photos of the ISIS leader Abu Bakr al-Baghdadi on donkeys in central Mosul, and this pushed the ISIS members to pursue the donkeys to kill them.”

“ISIS mobilized its fighters in the city of Mosul, and raided the house in order to search for the people who hung Baghdadi’s pictures on the donkeys,” Sumaria added.

It is worth to mention that the city of Mosul has been under the ISIS control since 10 June 2014; and since then it suffers from major security and humanitarian crisis due to ISIS extreme ideology on all aspects of life in the city. Also, the international coalition air forces continues to strike ISIS sites and headquarters in the province, killing and wounding a number of militants.