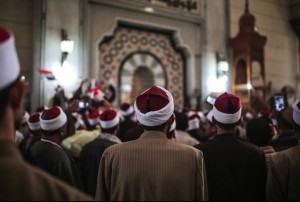 Egypt’s top Muslim authority, al-Azhar has condemned the executions of some 30 Ethiopian Christians kidnapped by the Islamic State terrorist group in Libya.

According to Press TV, Al-Azhar made the remarks in a statement posted on its Facebook page on Monday, a day after ISIL released a videopurportedly showing the killings.

The 20-minute footage purportedly shows the beheading of a group of around 12 Ethiopian Christian men on a beach and the shooting of another group of at least 16 others in a desert area.

Al-Azhar added the actions of “Daesh and other similar organizations do not comply by any means with any religion, human laws and customs.”

This is while the office of Egyptian President Abdel Fattah el-Sisi also condemned the executions, calling for an international effort to end the crisis in neighboring Libya.

It also said steps must be taken to “restore the Libyan state and its security and stability, as well as halting money and arms flows to terrorist and extremist groups present in Libya.”