You are here: Home / MidEastGulf / Al Assad ‘ready to collaborate with Qatar, Saudi Arabia’ against Daesh 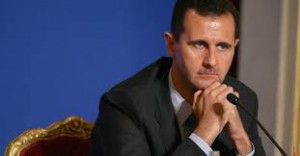 Syrian President Bashar Al Assad rejected calls to step down and criticised the US and its European and Arab allies for not coordinating with him on the fight against Daesh as hundreds of thousands of refugees flee the civil war in his country.

“The president comes to power with the consent of the people, through elections, and he leaves at the request of the people, not by a decision of the US, the UN Security Council, the Geneva Conference or the Geneva Communique,” Al Assad said in an interview with Russian media, according to state-run RIA Novosti. “That’s my principle position.”

More than 250,000 people have died in the Syrian conflict since 2011, which has traumatised the Middle East, spilling into its neighbours, and provoked an exodus of refugees seeking safety in the European Union. While Daesh controls as much as half of Syria, rebel militants trying to oust Al Assad backed by the US, Saudi Arabia, Turkey and Qatar are also gaining ground.

A coalition led by the US to fight Daesh isn’t coordinating its actions with Syria and hasn’t contacted the government since last year, according to Al Assad. “We’re fighting, if it’s possible to say, a common enemy, striking the same targets in the same places without any coordination,” Al Assad said.

Syria is ready to collaborate with Turkey, Qatar, Saudi Arabia, France, the US and other states, if the countries focus on fighting terrorists and stop shielding them, according to Al Assad.

The US and Europe have said Al Assad can’t be part of a solution. Russia’s continued support for the Syrian leader “risks exacerbating and extending the conflict, and undermining our shared goal of fighting extremism,” US Secretary of State John Kerry said in a phone call on Tuesday with Russian Foreign Minister Sergei Lavrov, according to a State Department statement.

The US “would welcome a constructive Russian role” in combating Daesh, while Al Assad “could never be a credible member” of the coalition, Kerry said, according to the statement.

Russian military aid to the Syrian government “only contributes to the spiral of violence,” French Prime Minister Manuel Valls said at the start of a parliamentary debate on Tuesday about extending France’s part in the US-led air campaign against Daesh.

While Russia has sent signals to the US and Saudi Arabia that it may allow Al Assad to be eased out of power, according to officials, Russian President Vladimir Putin said Tuesday that the fight against Daesh should be the global community’s top priority in Syria, rather than supplanting the regime.

Russia is escalating military aid to Syria, which hosts the only Russian naval base outside the former Soviet Union, and is building a new air hub in the Middle East nation, according to the US.