You are here: Home / MidEastGulf / Airstrikes resume in Yemen 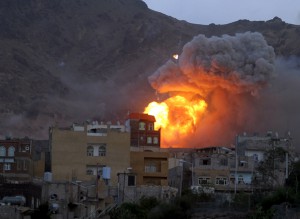 A Saudi-led coalition has reportedly resumed airstrikes on rebels in Yemen after a 5-day ceasefire expired on Sunday night.

Government troops of President Abd-Rabbu Mansour Hadi and rebel forces had generally observed the truce except in some southern areas.

The Qatar-based Al Jazeera TV network has reported that Saudi-led forces resumed bombardments in the southern city of Aden.

Saudi Arabia had warned that it would resume airstrikes because rebel forces did not stop fighting and attacked areas along the border.

A 3-day meeting began on Sunday in Saudi Arabia’s capital, Riyadh at the request of Hadi.

About 400 Yemeni tribal chiefs and people from political organizations are taking part in the meeting. But the rebel group did not send representatives.

The United Nations says over 1,500 people have died in Yemen since fighting intensified in March. Many of the victims are civilians.