You are here: Home / MidEastGulf / Airstrikes kill at least 35 throughout Yemen 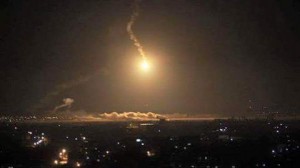 At least 35 people have been killed and dozens injured in airstrikes throughout Yemen since Sunday, the Defense Ministry said.

Yemen has become a proxy battleground for Saudi Arabia and Iran.

Yemen’s minority Houthis, who are Shiite, rebelled last year against the Sunni-led government of President Abdu Rabu Mansour Hadi, which is backed by Saudi Arabia.

Saudi Arabia got involved last March by launching airstrikes in support of Hadi against rebel targets in Yemen. Thousands of civilians have been killed in the violence.

Among the most recent victims was Almigdad Mojalli, a Yemeni journalist who reported for Western media outlets and worked for international organizations.

He was struck in an airstrike on the outskirts of Sanaa and later died of his injures, officials said.

Mojalli had been reporting for Voice of America since October, according to VOA.

“Truth-telling on the ground in the midst of conflict is a serious endeavor,” said Acting VOA Director Kelu Chao. “Reporting on the tragic nature of war requires fortitude and a willingness to take risks. Mr. Mojalli was a fine journalist and an example for us all. We mourn the loss of this courageous man.”

Separately, at least 11 people were killed and 16 injured Sunday in a powerful car bomb explosion that targeted the head of security in the Yemeni city of Aden, senior security officials told CNN.

Shalal Shayyeh escaped the attack with injuries, and has been moved to an undisclosed location for security purposes, the officials said. Two of his bodyguards were killed in the attack, and at least six others were injured.

The attack is the latest in a series of assassinations or attempts in Aden over the last month.

At least 25 officials have been killed in that city since early December, when the former governor of Aden was targeted in an ISIS car bombing.

Aden has been the headquarters for President Hadi and his allied Yemeni government since July, when Saudi-led coalition forces defeated the Houthis there.

The city faces serious security challenges, including militant groups that control key districts, and there are concerns over the future of the temporary capital.