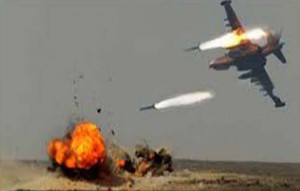 At least 17 militants were killed when Pakistan Air Force jets pounded their hideouts in country’s restive North Waziristan region where the military has launched an offensive against the Taliban.

The latest strikes were carried out on Sunday in Shawal area, targeting militants’ positions at Gorbaz and Zoi villages of North Waziristan, a senior army official said.

“We have reports that 17 militants were killed and several others injured,” he said, adding that several hideouts were also wiped out in the attacks.

Shawal is said to be the last stronghold of militants and the battle for its control has been going on for the past many weeks.

Pakistan launched an offensive in North Waziristan region in June last year. It has claimed to have killed more than 3,000 militants so far and taking control of over 90 per cent area of the district.