You are here: Home / MidEastGulf / Airstrikes continue on IS locations in western Mosul preparing for invasion 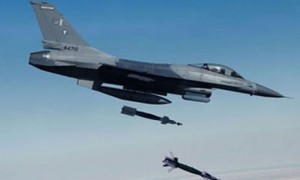 Iraqi and international coalition fighter jets pounded Islamic State locations in western Mosul on the dawn of Friday in preparation for a wide-scale invasion of the region to drive out Islamic State militants, according to iraqinews.com.

Artillery forces also shelled the region, according to a report by Dijlah TV, which quoted a security force in Nineveh.

Besides several other pockets in Iraq, Islamic State militants had held Mosul since 2014 and proclaimed it the capital of their self-styled “Islamic State”.

Iraqi government forces, backed by a U.S.-led coalition and popular militias, launched a major offensive in October to retake the city, and operations have so far recaptured the whole of the eastern side and left at least 3300 militants dead. Forces are awaiting a green light from the supreme command to start a ground invasion against the extremist group in the west, which is close to the borders with Syria.

The conflict in Mosul has forced at least 191.000 civilians to flee homes to refugee camps, and many of those are targeted by IS extremists while attempting to flee areas under their control.

On Thursday, the U.S. army said in a statement that 11 civilians were killed during operations against Islamic State between October 25th and December 9th.