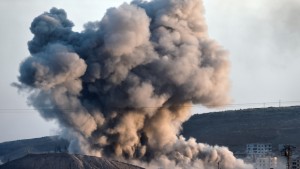 Libyan militias launched an airstrike on the Islamic State controlled Sirte killing 15 and injuring 10 others, a militia source told Xinhua on Tuesday.

“A warplane attacked a location of IS militants in Noflia town, some 120 km east of Sirte, killing 15 militants and injuring 10 others,” a source for the 166 Battalion militia of the Islamist militant Libya Dawn told Xinhua.

The injured militants were taken to a hospital in the near Abo Jawad town, the source added, confirming that the air strikes will continue on Sirte against IS strongholds.

After having taken the eastern city of Derna, IS affiliates recently took over the city of Sirte since Libya Dawn militias evacuated the city.

Libya, an oil-rich North African country, has been suffering continuous violence since the fall of Muammar Gaddafi’s regime in 2011. Since then, the country has been plagued with many armed groups battling for dominance.