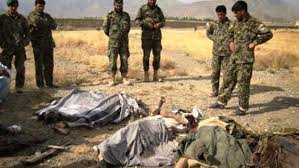 Neither civilians nor security personnel has been hurt during the air strikes, the official stressed.

Taliban militants fighting the government to regain power are yet to make comment.