You are here: Home / MidEastGulf / Air strikes in Syria kill 170 Islamic State fighters in the past 48 hours 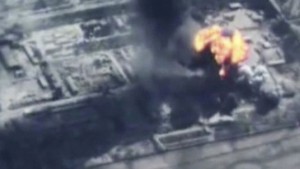 Air strikes by a US-led coalition against the Islamic State group in northeastern Syria have killed around 170 jihadists in the past 48 hours, a monitoring group says.

“The jihadists were killed in the past 48 hours in the province of Hasakeh, nearly all of them in very intense air strikes by the international coalition which is helping Kurdish forces in the area,” said the Syrian Observatory for Human Rights on Tuesday (local time).

In its latest update on the coalition’s operations, the US military said in a statement that the alliance’s warplanes carried out seven strikes near Hasakeh.

The loss of Al-Mastumah base leaves only a few positions in regime hands in the province, which lies along the border with Turkey and neighbours the government stronghold of Latakia province on the Mediterranean coast.

“All regime forces have withdrawn from Al-Mastumah, the largest regime base in Idlib, leaving it completely in the hands of opposition fighters,” Rami Abdel Rahman, head of the Syrian Observatory for Human Rights, told AFP.