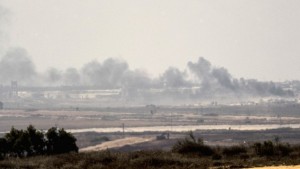 Sirens warning of an impending rocket attack blared early Monday morning in communities in the Sha’ar Hanegev Regional Council in southern Israel. The projectile reportedly landed inside the Gaza Strip.

The Code Red alarm sounded just before 7:00 a.m. on Monday. The IDF said in a statement shortly thereafter that they didn’t identify any rocket impacts in Israeli territory.

There were no immediate reports of injuries or damage in either incident.

Earlier this month, tensions between Israel and the Hamas-run Gaza Strip flared after a series of rocket launches into Israel and Israeli retaliation.

One of the rockets hit the southern Israeli town of Sderot and exploded in the middle of a street, causing some damage to the road, cars and nearby homes. Three people were hospitalized after suffering anxiety attacks.

The Islamic State-affiliated Ahfad al-Sahaba-Aknaf Bayt al-Maqdis terrorist group took responsibility for that attack. In a statement, the group said the attack on Sderot was a response to Hamas arresting several members of the organization.

In response, the IDF struck Hamas targets, first with tank fire and then with a series of airstrikes in Gaza, hitting “key Hamas strategic infrastructure,” according to a military official.

In a statement, the IDF explained that Hamas ultimately “bears responsibility for every terror incident emanating from” the Gaza Strip.”

After the airstrikes Hamas reportedly sent a message to Israel calling for calm and saying the terrorist group was not interested in a further escalation of tensions.

A Hamas official said the group told Israel it would not allow other terrorist groups within Gaza to further inflame the situation, according to Israel Radio. He said that the group passed on the message via a third party, Israel Radio reported.