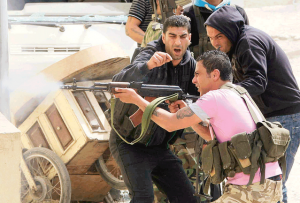 Ain el-Hilweh camp for Palestinian refugees that lies near the southern city of Sidon has been considered one of the most complicated issues for both the Lebanese state and Palestinian factions, like reported by aawsat.com. Despite all the efforts they have exerted, the Lebanese government and the factions have found themselves powerless in separating this camp, which has a population of more than 100,000 people, from the rest of security concerns that have engulfed Lebanon over the past decades.

In light of the recent clashes which erupted at the camp between Fatah movement and extremist factions, a Lebanese-Palestinian accord was reached under which all Lebanese outlaws taking refuge in the camp would be handed over to the authorities.

The critical location of this camp, in the suburbs of Sidon, its transformation into a stronghold for dangerous terrorist outlaws, and its exploitation as an operation room for terrorist attacks, have aggravated the suffering of thousands of Palestinian refugees. This misery grew after the camp began receiving tens of thousands of new Syrian refugees who were displaced in their country’s civil war that erupted in 2011.

Leaders of Palestinian factions succeeded, over the past years, in preventing their camps from being dragged into the Syrian war, although many Palestinian fighters from the shantytowns headed to Syria. However, these factions failed in maintaining stability in Ain el-Hilweh, which witnesses occasional clashes that negatively affect the fragile Lebanese security situation.

The proliferation of arms and the absence of Lebanese security forces at Lebanon’s 12 refugee camps have been the main factors behind turning the shantytowns into “time bombs.”

Ain el-Hilweh’s security was always handled by a joint Palestinian force, which often adopted compromised security solutions that aggravated the crisis rather than solving it.

Among the different problems that resulted from such action was the harboring of Lebanese fugitives including Fadel Shaker and Shadi al-Mawlawi.

The Palestinian factions’ swift response to the accord reached last week was noteworthy. According to PLO’s politburo member Salah al-Youssef, the number of Lebanese outlaws in Ain el-Hilweh exceeds 20, while fugitives from other nationalities, who belong to extremist factions like Jund al-Sham, Fatah al-Islam, and Al-Qaeda, are more than 150.

The Lebanese Army’s Command expects leaders of factions to take more efficient steps in handing over fugitives. Therefore, it has built a massive wall around the camp, and intends to erect electric gates and surveillance towers to control the infiltration of outlaws. The construction of this wall led to an outcry from several factions that said it has aggravated the burdens of refugees, who are not allowed to work in many sectors.

Recent reports said this wall was built at the request of international companies, which will operate soon in Lebanon in oil and gas exploration. The companies consider the camp a chaotic area that may expose their workers to dangers.

However, the concern of the Lebanese authorities is not only over the presence of the extremist members in the camp, but also the infiltration of wanted individuals into Lebanon for the purpose of seeking refuge in Ain el-Hilweh.

A report prepared by Palestinian Human Rights NGO “Witness” showed that the issue of outlaws has had dangerous economic, social, and security repercussions on the camp.

According to the report, those wanted individuals, who cannot leave the camp, count on their parents and families to provide them with money, food, shelter, and protection.

Echoes of the region’s developments

Sources observing developments in Ain el-Hilweh consider that the camp’s situation has been a reflection of the region’s crises. They told Asharq Al-Awsat that talks on dividing Syria into areas of influence for regional and international powers will affect Lebanon and awaken different Lebanese sects that had in the past called for the establishment of their own cantons.

According to the sources, any security solution in Lebanon should start from Ain el-Hilweh, which has been transformed into several small shantytowns controlled by different extremist factions implementing foreign agendas.
The sources concluded that this camp has become a ticking time bomb that can explode any moment.

Hezbollah and its supporters

The “Hezbollah”-led March 8 coalition, which is backed by Tehran and Damascus, is concerned that the developments in Ain el-Hilweh are aimed at “cutting the road” to south Lebanon, the group’s stronghold.

Although more than 25 years have passed since the end of Lebanon’s civil war, fears of Palestinian involvement in any inter-Lebanese confrontation have not dissipated because more than 500,000 refugees are living in Lebanon since 1984. Lebanon’s political balance has become more threatened after more than one million displaced Syrians joined them.

The March 8 coalition has also expressed concern over an international plan to naturalize Palestinians. Sources said several statements made by Palestinian President Mahmoud Abbas that refugees are guests and his flexibility concerning Palestinian arms inside and outside camps pave for the disarmament of Palestinians and their merge with the Lebanese community.

ISIS in the camp

Serious discussions on ISIS’ presence at the camp started in 2015 following a suicide bombing that targeted the Alawite neighborhood of Jabal Mohsen in the northern city of Tripoli.

ISIS has not yet made an announcement on its existence in Lebanon. But apparently it coordinates with some extremist groups working discretely like the “Muslim Youth Group” (Al-Shabab Al-Muslim), which includes members from Fatah Al-Islam.

According to Ain el-Hilweh sources, members who have pledged allegiance to ISIS in the camp are few.

According to the United Nations Relief and Works Agency for Palestine Refugees (UNRWA)’s data in 2009, the number of registered Palestinian refugees in Lebanon reached 422,188, 199,412 of whom live outside the camps.

The number of refugees in Lebanon represents around 9% of refugees registered with UNRWA, and around 12% of Lebanon’s population. Palestinian activists say that these figures are not accurate, as many refugees living in camps are not registered, while others don’t have identification papers.

Half of the refugees currently live in 12 camps distributed in different areas across Lebanon.