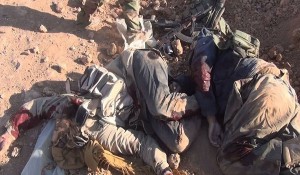 Reports said on Saturday that Syrian army soldiers and popular forces’ major advances in Northern Hama and the death of a large number of terrorists in battles with government forces demoralized the militants, adding that militants were withdrawing from vast lands in the province.

“Simultaneous with fresh advances of the Syrian army soldiers and National Defense Forces in Northern Hama, Jund al-Aqsa leadership has decided to remove a notorious commander of Idlib Free Army, Mohammad Jafrouni, due to his numerous defeats in the battles in Northern Hama,” the sources said.

“Defense lines of the terrorist groups in Northern Hama are being captured one after another in the government forces’ incessant attacks,” they added.

“Terrorist groups, who have been defeated by the Syrian soldiers, are using blind heavy missile and artillery shelling of residential areas in the town of Mahroudeh in Northwestern Hama, inflicting several casualties on civilians,” the sources went on to say, FNA reported.