You are here: Home / Mediterranean / After the fall of Daesh, the return of the Islamic radicals in Morocco 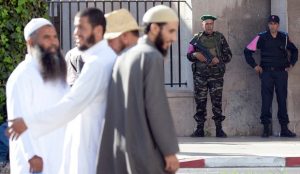 After failing to start a new life in Syria under the Islamic State, Ahmed (not his real name) decided to go back to his home country. But as soon as he stepped foot on Moroccan soil he was arrested, like reported by middleeasteye.net.

Ahmed had decided to follow his mother, a housemaid who wanted to leave for Syria because of a family conflict and resulting financial problems that she believed didn’t leave her with any other choice but to start a new life elsewhere.

Stuck with her son in a small apartment that she was forced to share with her brother and having nowhere else to go, she decided to join IS and convinced her son to go with her.

Ahmed didn’t want to let her go there by herself. And he had always dreamt of going to medical school, which he was brought to believe he could do in IS’s so-called “caliphate”. To both of them, settling in IS-held territory was a way out that matched their religious beliefs.

“Most [of the people who join IS] go there to improve their economic and social situation. They’re giving them some hope,” Khalil Idrissi, a lawyer who has worked on terrorism-related cases and now represents several defendants arrested for joining IS, told MEE.

“They’re looking for an easy solution. Paradise if they die, or Daesh [an Arabic name for IS] if they remain alive.”

Although they never made it to Syria, like most youngsters who have tried to join IS, Ahmed was tried – his mother was not – and sentenced to a two-year term for attempting to join a terrorist organisation.

Moroccan authorities regularly announce the dismantling of terrorism cells and have cracked down hard on people coming back from Syria and Iraq as well as from Libya, fearing they could otherwise get involved in militant activities.

According to Moroccan officials, at least 1,600 Moroccans have left the country to join militant groups, most commonly IS, in recent years. During the last two years, about 70 were arrested while coming back to Morocco.

When the first wave of Moroccan fighters left, they could easily get out of the country and travel to Syria, mainly through Turkey. Several former detainees sentenced for terrorism easily obtained travel documentation and left Morocco without any difficulties, sometimes just days after being released, according to sources close to Salafi activists.

But when they started to return to Morocco and as the militant threat increased, Moroccan authorities started to systematically arrest them.

Since 2014, most of those who have come back have been brought to court. In January 2015, the anti-terrorism law of 2003 was amended in order to criminalise joining as well as having the intention of joining groups outside Morocco.

A special investigative office of the judiciary, the Bureau central d’investigation judiciaire (BCIJ), was created a few weeks later and has officially dismantled more than 40 alleged militant cells and arrested 548 people since.

The Syrian conflict has attracted people from diverse social backgrounds and throughout the country, including women who in a few cases left their children and husbands behind.

In a country where opportunities to climb the social ladder are scarce and youth unemployment is high, some see IS as offering a chance for personal enrichment and advancement.

Some observers even draw a parallel between those travelling to the Syria conflict and Moroccan migrants who crossed the sea to pursue the dream of a better life in Europe.

Abdelaziz El Mehdali’s story illustrates this sense of fulfilment that many Moroccan militants believed they could not find at home.

Known as Abou Oussama El Maghribi, the former street vendor had participated in popular protests in 2011, although mainly to call for the release of Salafi political prisoners rather than in support of the pro-democracy February 20 movement.

Faced with a lack of opportunities in his hometown, Fnideq, where many militants have come from, he joined the then-al-Qaeda-aligned Nusra Front in Syria before defecting to IS and eventually dying in clashes with Nusra fighters in 2014.

The first wave of fighters left in 2012, at a time when the international community opposed Syrian President Bashar al-Assad’s government. Many youngsters, including some who did not have any links to militant or radical religious groups, answered the call of renowned religious scholars.

A duty to fight Assad

At the Cairo conference of 2012, clerics including Youssef al-Qardawi and Mohamed al-Arifi declared it was a duty to help those fighting against Assad. That year in December, Morocco hosted the Friends of Syria conference in Marrakech. For some keen to volunteer for “jihad”, the event appeared to be a green light to go with the Moroccan authorities’ blessing.

“They believe they’re going to go to heaven. They believe they are doing something great,” explained Mohamed Abdelouahad Al Rafiqi, known as Abu Hafs, a former cleric propogating militant ideas jailed in the wake of the 2003 Casablanca attacks in which 45 people including the 12 bombers were killed for having allegedly inspired the plot.

“I used to find them [jihadis] great,” he said of those who had gone to Syria. “They were sacrificing everything. They were making a sacrifice other people couldn’t do. There are people who had comfortable lives, who were rich, who did it,” he added.

But since his release by royal pardon in 2012, Al-Rafiqi’s position has changed. Last month he launched a new research centre financed by the conservative Istiqlal party where he hopes to draw on his own experiences to discourage others from being drawn into militancy and extremism.

One of the most outspoken, Omar Haddouchi, who was also sentenced for inspiring the 2003 Casablanca attacks and released after a royal pardon, was accused of leaning towards the Nusra Front but nonetheless said that the war in Syria was of no concern to Moroccans. He later toned down his rhetoric and declared he had declined an approach from IS to represent the group in Morocco.

In 2013, a militant organisation known as Harakat Sham al-Islam was set up exclusively for Moroccans eager to fight against Assad. Among its combatants were Mohamed Mahzouz and Mohamed Alami, and Brahim Benchekroun, three former Guantanamo detainees.

Benchekroun – who was killed in Syria in 2014 – was accused of fighting in Afghanistan following his arrest in 2002 in Pakistan and imprisoned in Bagram, Kandahar, then Guantanamo in 2004, from where he was transferred to Morocco. He was released in 2005, only to be arrested again months later accused of recruiting combatants for Iraq.

In prison in Morocco, Benchekroun met many of those jailed over the Casablanca attacks.

“These former detainees had the same ideology before going to jail,” stressed Abu Hafs. “All were already jihadis. Jail reinforced the personal links between them. Most Moroccans were invited by a close one or a friend who preceded them at Daesh.”

After his release, Benchekroun protested for Salafi political prisoners’ rights by demonstrating alongside members of the CCDI (the Collective Committee for the Defense of Political Detainees), a campaign group created in 2011.

A renowned figure in the Moroccan militant sphere, Oum Adam was also an outspoken voice of the committee. Educated at the Sorbonne in Paris and the wife of Mejatti, an al-Qaeda militant killed with their son in Saudi Arabia in 2005, she had pledged allegiance to Osama Bin Laden. She was then extradited and imprisoned in Morocco for several months. Three years ago, she pledged allegiance to IS, and followed her son there.

Cases such as those of Oum Adam and Benchekroun demonstrate the ability of IS to attract former al-Qaeda supporters.

But Abu Hafs said that the group’s propaganda, which projects the image of an Islamic state in which Muslims could live according to their religious beliefs, had also proved appealing to some ordinary Moroccans.

“That is the success of Daesh. Personally, I changed my mind but at a certain period of time, I used to dream of an Islamic state,” he said.

With IS now suffering heavy military losses in both Syria and Iraq, the appeal of that message may have faded. But for Morocco, the challenge of dealing with the fallout of IS’s collapse, as more returnees head home, may only just have begun.

Despite recent reforms in education programmes and tighter government control over mosques and religious messaging, a major threat lies in the prevalence of IS’s ideology, which according to critics, has not been fully addressed by the authorities.

Until today, the state’s response has focused on a security approach, without any real policy to fight against radicalisation, says Abu Hafs.

“They don’t do much beyond jailing those who return for two or three years. Then they release them without any guidance.”